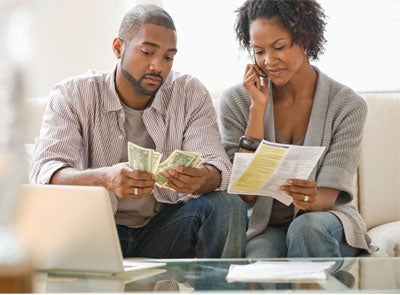 I’m one of those women who always fantasized about life as a wife and mother. You know, getting married, moving into the house with the white picket fence and then painlessly birthing three obedient, over-achieving kids.

Most important, I planned on being the epitome of the doting spouse. In my mind, the ideal wife was an overflowing well of support to for her man. She believed in him. She allowed him to lead. She trusted him.

When I met Ron* I knew that my dream was about to become a reality. We had a natural bond, great chemistry and the same ideals about happily ever after. The best part is that I knew that Ron would be good provider. He had a promising career and was an aspiring entrepreneur. Within a few years we went from dating to coupledom, to family.

Though I had a career — and managed my personal finances before we were together — I let Ron do it all. It seemed like we had a great system. We both deposited the lion’s share of our income into a family account, which was then divvied into checking, savings and retirement. In addition, we each had bi-weekly allowances transferred into our own accounts, so there was no issue with personal spending money. We made minor purchases from our own purses and big purchases from the family account… at least that’s how it was supposed to be.

One day I checked the mail, saw our bank statement and decided to look through it. We had much less money in our accounts than I expected. We only had a few hundred dollars in savings, and our retirement accounts didn’t reflect months of deposits that we had scheduled. My initial response was disbelief. Instead of going to the obvious ‘Ron’s doing something shady’ — I created a great rationale, the economy. Still, I knew that couldn’t be the case. Even if it impacted our IRA that wouldn’t explain the missing funds in our savings accounts.

When I confronted Ron he was defensive, but honest. As the leader of our household he’d decided to invest in several business ventures that weren’t successful. In all, he’d lost about $40,000. Yep. I was speechless. Initially, I was upset, hurt and betrayed. Then it hit. Ron hadn’t taken anything from me; I gave it to him.

My ignorance was bliss. I loathed the single life and handling my finances, so when I got married I happily turned my life over to my king, savior and knight in a Brooks Brothers suit. Ron’s folly was not due to his greed or shadiness — he truly thought the investments would leave our family in a better place. However, the extent of the loss was due to my laziness. By saying “you got it,” I removed myself from the equation.

Today I am balancing reconciling my ideals about happily ever after and the truth: it takes work. When it comes to finances, two heads are better than one — at least in our household. Ron and I currently review our bills and investments together. Now, he no longer has the pressure of figuring things out on his own. In addition, we get to hash out pros and cons as we strategize. Handling our household finances was never something I thought would be on my plate. Luckily, being a good partner will always be there.