If the clients of Jyll Hubbard-Salk, owner of Urban Asanas Yoga Studio, had their way, she’d be cloned. Otherwise, how could she possibly respond to their constant requests to teach all 30 of the classes that she offers each week? This adoration is just one reason why Hubbard-Salk opened her own studio. A year ago she made her dream come true after saving $20,000 over a five-year period. “It was Divine order,” she says.

The seed was planted when Hubbard-Salk accepted the invitation, from her brother Gregg, to try yoga. “It was love at first sight,” says the Yogi who’s been teaching for 15 years. “It moved me internally. It was fierce. It was calming and I felt strong mentally, spiritually, and physically,” she says. And that’s when she decided that it was imperative to spread this feeling to others, particularly in her pre-gentrified neighborhood.

“It was time to have more of a diverse community in the yoga world, and for classes to be more accessible and affordable,” says Hubbard-Salk whose classes start at fifteen dollars and include a donation based option. She also offers complimentary mat rental, filtered water, and top-notch accessories.

She had no interest in cutting corners to build what is affectionately known as the “light house of Nostrand Avenue” in Brooklyn, New York. “It’s swanky,” says Hubbard-Salk who completed her project without a loan. “I wanted to give people in my neighborhood high quality, not mediocre, things. I wanted to add to the community and give back.”

She and her husband Danny put money away until she found an ideal space. Danny also advised her to add a clause to her 10-year lease that gives her first dibs if the owners sell. “We always saved,” she says. “I was just waiting for the door to open, and I needed to be ready.” And when the time came the following steps lit her path.

Use Your Network: “Some friends saw my vision and they came in and helped with designing, constructing, and painting the studio,” says Hubbard-Salk. “I provided the supplies and they extended their talents. This helped me cut down my costs considerably. I walk in grace so everything fell in place.”

Have a Plan: Make sure you have a good contractor advises Hubbard-Salk. “You have to budget expenses for wood, computers, toiletries, and products,” she adds. “And always have a cushion in case anything falls through or needs to be redone. Also, barter. You can offer your service in exchange for someone else’s expertise.”

Staff up: “I made great money the first month that my studio was open,” says Hubbard-Salk. “I taught every class but then I had no energy for myself and my family. You can’t do it all. You have to ask for help. I carved out a budget and hired other teachers.”

Hire an accountant: “I can write off a list of things from yoga clothes to interviews with potential instructors over lunch,” she says. “I also go to classes to sustain my own health. And I can’t forget to pay myself as an owner. All of these tips come from having an excellent accountant.”

Listen to your intuition: “Sit and let the answers come to you,” says Hubbard-Salk. “When you slow down and smell the roses, you avoid the thorns. Meditate. Be good in your heart. Humility is often the price for miracles.”

Although Hubbard-Salk faced challenges, the setbacks never stopped her from pushing forward. “When I opened my studio my client base decreased,” says Hubbard-Salk who taught sold out classes at other studios just minutes away from her new location. “It’s been trying at times, on my marriage and my family, but we are all strong.”

She compares the experience to having a fourth child. “I had a baby and it was named Urban Asanas,” says the mother of three girls, Sierra, Cypress, and Indigo, who all “tightened it up” to ensure the success of the studio. “At times, the process felt like postpartum. But I had to set the foundation to make sure my business would flourish. And in hind sight, I wouldn’t do anything differently. 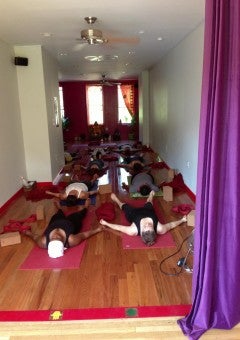