By Tamara E. Holmes · Updated October 23, 2020
This feature originally appeared in the May 2018 Issue of ESSENCE Magazine. Early in her career, Tana M. Session was an executive assistant to a boss who would constantly joke with her and make crude and sexually explicit comments. “It was in the nineties. I really felt I had no recourse except just to grin and bear it,” says Session, 49, who is now a human resources consultant. When she couldn’t stomach it anymore, she started looking for another job and eventually found one, though she took a pay cut. Sadly, Session’s story isn’t rare. According to a 2016 study by the U.S. Equal Employment Opportunity Commission (EEOC), anywhere between 25 and 85 percent of -women have encountered sexual harassment in the workplace. The difference between then and now is the upswing in the popularity of the #MeToo movement, a campaign created a decade ago by activist Tarana Burke that put stories of sexual assault and harassment in the spotlight. Ever since numerous allegations of lurid behavior from Hollywood bigwigs came to national attention in 2017, many companies have begun to take these claims more seriously. While #MeToo has largely focused on the rich and powerful in Hollywood, media and government, the truth is, sexual harassment can happen to any one of us—anywhere. Here’s what you need to know if it occurs at your job. Understanding The Racial Impact “Black women tend to experience higher rates of sexual harassment [than any other group],” says Nicole T. Buchanan, an associate professor of psychology at Michigan State University. “They are more likely to be targeted for more severe forms of [it], and are likely to be economically vulnerable or unable to extract themselves from [the situation] within the organization,” Buchanan says. To research this issue, Buchanan conducted focus groups with Black professional women across the country. Some described being subjected to remarks directly highlighting parts of our bodies that have historically been hypersexualized. Others refrained from voicing complaints because they were afraid they wouldn’t be believed or might be accused of playing the race card. In cases in which the offender was a Black man, some women were more hesitant to say anything for fear of being labeled a traitor to their own race. If you find yourself subject to unwanted behavior, first tell the person to stop, says Sherry Sims, founder of Black Career Women’s Network, a professional development organization. “Let the [person] know that [the] statement made you feel uncomfortable.” Sometimes speaking up will nip the behavior in the bud. It worked for Merci L. McKinley, 35. In her early twenties, she was in the military when a fellow soldier made quips about how her short stature was perfect for certain sexual acts. McKinley didn’t laugh. “I just made it perfectly clear: ‘Hey, I’m here to get my job done, and I don’t appreciate the comments that you’re making. And if it doesn’t stop, then I’m going to elevate it higher,’ ” she says. Next, be sure to document what transpired. “You need to provide specific details of what actions were taken by whoever it is you are alleging is harassing you,” says Annette Newman, an employment, labor law and civil rights attorney in Fort Lauderdale, Florida. That means writing down the time and location of the incident, what was said or done, and your reaction to it. Also include details such as the names of any witnesses, if possible. If the bad behavior continues, then you should bring the matter to someone else’s attention, says Dee C. Marshall, an executive coach and diversity consultant. Your employer’s sexual harassment policy should explain the procedures, such as whether you should initially go to your manager or to human -resources to report a violation. When you do, be ready to produce your evidence, Marshall continues. Also, take notes on what happens during your session with human resources and every action the department takes pertaining to your allegations. Unfortunately, many women have found HR to be less than helpful. In fact, a 2017 poll by ABC News and The Washington Post indicates that among women who had experienced sexual harassment in the workplace, a whopping 95 percent believed that the accused go unpunished. “You have to gauge if your human resources department is pro-employer or pro-employee,” says Sims. If HR doesn’t do anything, take your concerns to a vice-president or someone who oversees the HR department, Sims adds. 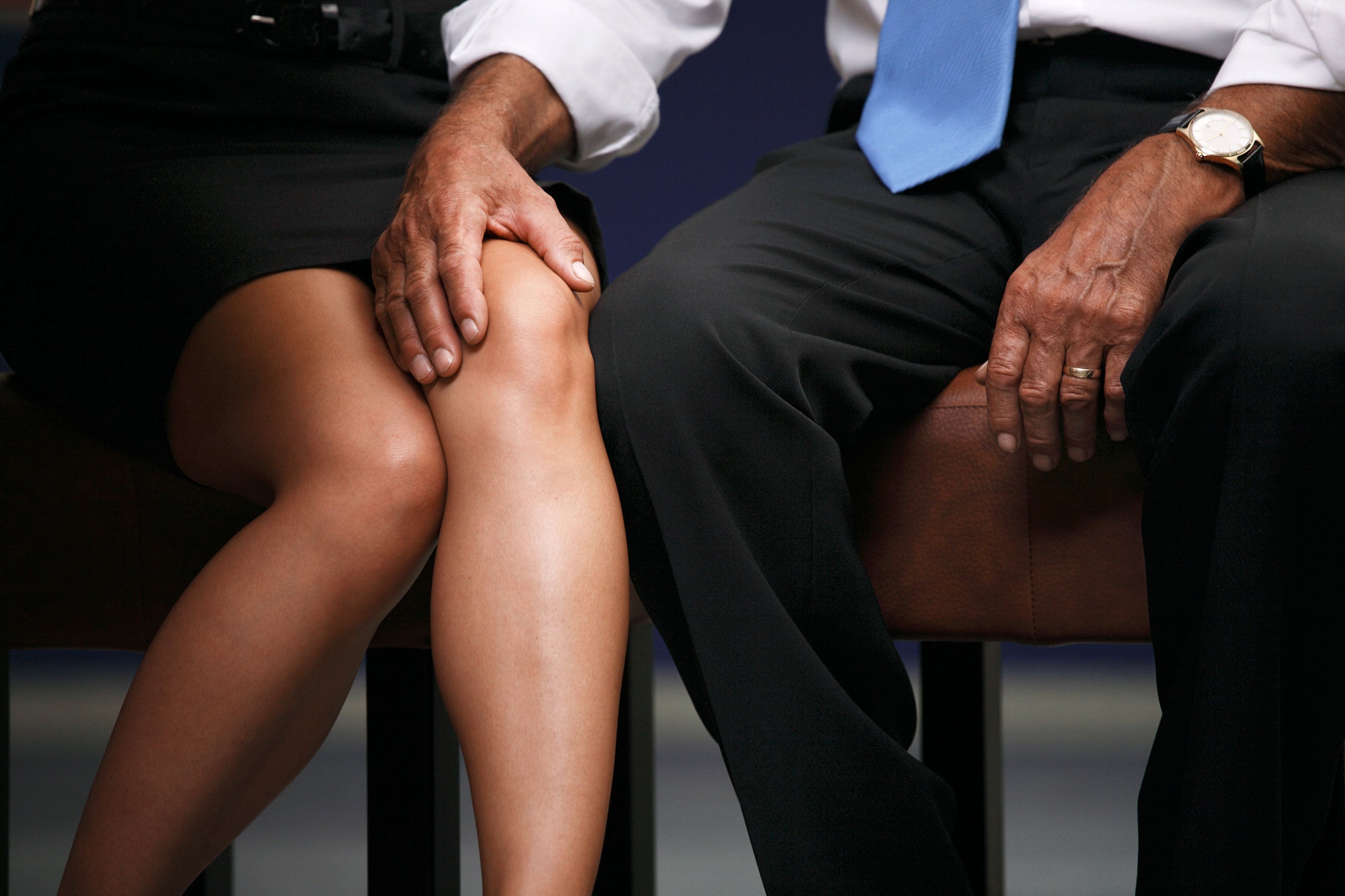 Knowing Your Rights If you’ve followed all internal procedures to report a claim and a remedy hasn’t been offered, start exploring legal options. First file your complaint with the EEOC. Federal protections against sexual harassment fall under Title VII of the Civil Rights Act of 1964. If your state has laws against sexual harassment, put in a claim with the agency that oversees this issue, advises Connie A. Broussard, an employment lawyer in San Diego who investigates workplace sexual harassment. However, you must act fast. The statute of limitations for a complaint can be as short as three to six months, depending on the case and where it happened, Broussard says. When filing the claim, you’ll be asked to provide basic information about the incident, such as what actions you believe were discriminatory and when the actions took place. At this point, you should be looking for an attorney. Many offer a free consultation, and some may even take the case on contingency or partial contingency, which means you would pay either nothing or a small sum unless the attorney wins money for you, Broussard says. You can contact Equal Rights Advocates for free advice on your options. The EEOC will offer mediation between you and your employer, but both of you would have to agree to it. (An attorney can help you through the process.) The goal is to resolve the situation quickly. Perhaps your employer could transfer you or the accused harasser to a different department so you would no longer work together. Other possible outcomes could be terminating the accused or -negotiating a financial settlement for your emotional suffering. If mediation fails or is not agreed to, the EEOC would then pursue an investigation. If the commission determines there was indeed a violation, it will give you a Notice of Right to Sue. You need this form to take your employer to court. However, it may take years to settle a lawsuit, experts warn. Even so, legal action could help you receive damages. Remember, your documentation of the incident should be on point. Any retaliatory actions from your company or steps you’ve taken as a result of the harassment will also be examined in court. Reclaiming Your Power Because trauma affects everyone differently, the emotional or psychological symptoms resulting from sexual harassment can manifest in many ways, says Faith Troupe, Ph.D., a licensed marriage and family therapist associate in Cornelius, North Carolina. The ordeal can impact your ability to fulfill your responsibilities, says Marshall. “It will show up when we draw back—things like fear of speaking up, fear of showing up or fear of sharing space with men. It prevents us from climbing the ladder or [taking advantage of] opportunities for leadership and promotion,” she says. Victims often downplay what happened to them, and they may not realize how detrimental an incident was until days, months or even years later, Troupe says. Another common reaction is self-blame. But it runs counter to the way we respond to other types of offenses against us, Troupe points out: “We never say to the victim, ‘Oh, you shouldn’t have been walking with your wallet in your hand when that person stole it.’ ” Women who experience sexual misconduct should seek support, says Keisha M. Wells, a licensed professional counselor and founder of Transformation Counseling Services in Columbus, Georgia. “Isolation is the breeding ground for torment and suffering,” says Wells. Individual or group therapy, support groups and hotlines can help. Self-care—in the form of prayer, meditation, proper sleep and nutrition—is also important, Wells says. Regardless of what workplace or legal strategies you employ, your emotional health should be paramount and you should know you have the right to feel safe at work. “Just like men, we’re in the workplace to make a living for our family,” Session says. “We’re not there to be harassed.”
TOPICS:  Sexual Harassment