By Brittney Oliver · Updated October 23, 2020
In an era that demands inclusion over diversity, it’s no surprise the same is true when it comes to the public speaking space. And considering how lucrative the industry can be for some women (see: Michelle Obama), this is a space that Black women need to occupy. However, many event producers continue to have difficulty sourcing women of color keynotes and panelists for their stages. This problem ultimately prompted Smiley Poswolsky, a millennial workplace expert, to create a Women Speaker Initiative after spending three years on the speaker circuit. Though, if you ask Laura Mignott, owner and founder of DFlash agency, she’s put more people of color on stage at tech events alone, than any other producer. Just call her “the plug.” During the 2018 South by Southwest (SXSW) Interactive, Mignott and her team successfully curated a two-day event in 48 hours that featured a lineup of all-women speakers and presenters called YurHouse. The concept was simple: Mignott wanted to know what would happen if you had a conference within SXSW that attracted some of the best female speakers. She asked her network on social media, ”Who is a badass woman in tech who wants to speak?’ which resulted in 48 women speakers participating in YurHouse with 60 percent being women of color, two trans women and an 11-year-old with one arm. In the course of two days, the speakers lead conversations about blockchain, artificial intelligence, podcasting and how to start a business. In an era where voices increasingly demanded more inclusion for both women and people of color, Mignott’s programming couldn’t have come at a better time. YurHouse is just one of the many examples of how Mignott has created opportunities to put people of color on stages. Here’s how she’s utilized her skillset, her network, and her talent to help place other people of color opportunities on the speaker circuit. Ahead Mignott digs into how she got her start and why we need more Black women to step into the public speaking space. Building the Stage Mignott’s DFlash agency began as an event series that she hosted in New York City as a way to source clients for her consulting efforts. It was originally a side business but quickly morphed into a full-time operation due to the interest corporations had in her ability to create diverse panels with granular topics. “It was very important for me in the very beginning to make sure that I always put people who look like me on my stages,” says Mignott. Through great networking and positive word of mouth, brands began to hire her growing team to produce bigger events. Samsung became a client, and DFlash became their agency four out of five years at South by Southwest to build event activations and carry out programming. “I think that came from a really simple place: how we built our events, packed the house, had great results and great connections come out of those events. They were like, ‘If you can do that for us we will happily pay you,’” she shares. Since then DFlash has produced over 400 events and has worked with Bose, Netflix, Microsoft, Samsung and Visa where she created an environment that welcomes all attendees and created opportunities for talented people of color to share the stage. “I know what it means to feel like you’re the only one in the room. What I’ve always strived to do is that you’re never the only one if I’m in the room, and I want to do everything I possibly can to get as many people who look like me in those rooms and on those stages,” she says. 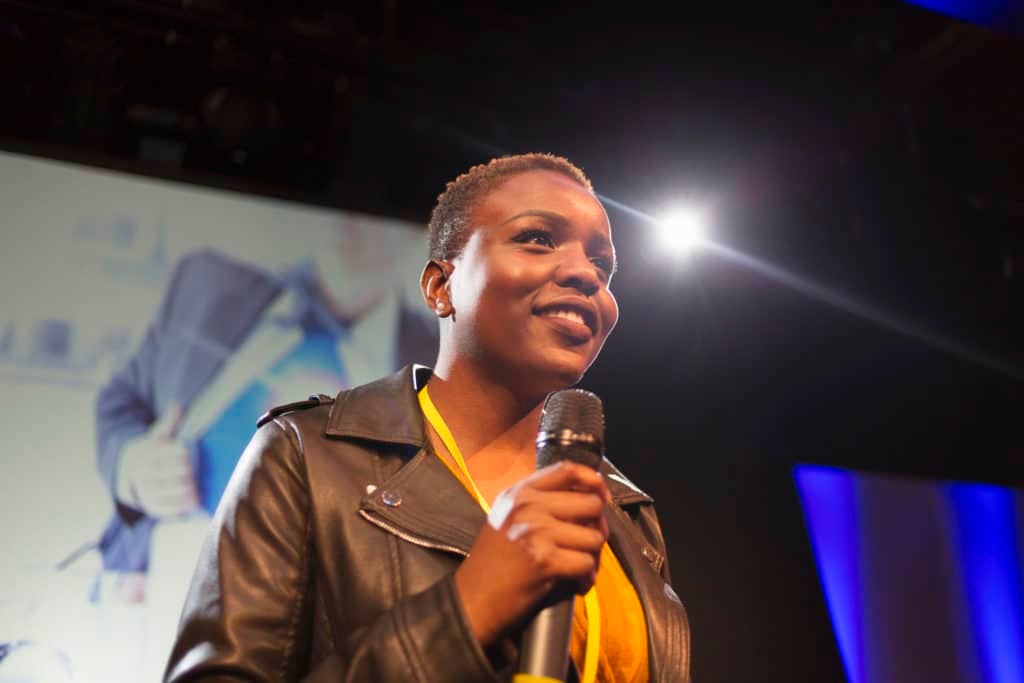 "Write the LinkedIn post, write the Medium post, tweet that you are attending a conference and talk about who you are and what you do,” says Mignott when asked about how Black women can attract more keynote opportunities.

What Black Women Can Do to Gain Speaker Opportunities There are three things Mignott suggests Black women need to do to get recruited to speak and that’s to “build your brand, toot your own horn and talk about how fabulous you are on all social platforms.” Making it easier for event recruiters to find you if you are a unicorn in your industry is important. For Mignott she shares her talents and expertise as a podcaster and  “Write the LinkedIn post, write the Medium post, tweet that you are attending a conference and talk about who you are and what you do,” Mignott adds. Even for Mignott, she has been able to find opportunities beyond event production as a podcaster and workplace futurist who is in the process of opening a co-working space concept for entrepreneurs over 30, in the spring of 2019 in New York City. The co-working space, YurHouse, is an extension of event activation curated at SXSW. “They can’t say they don’t see you, if they see you,” Mignott explains.   Be the Plug From knowing Black women in cybersecurity to Black women who work in cannabis, Mignott has become a go-to in her industry for knowing many unicorns in a variety of industries. “I get asked a lot, ‘how were you able to find all these speakers?” she shared, “The first fundamental problem is the lack of diverse network.” Mignott’s network is diverse because she believes it’s “important to be genuinely curious of people.” She has been intentional in creating events that are not inclusive to one race or gender, but only to showcase the top talent in certain industries. “I design spaces to make people feel welcomed because I’m always amazed by the connections and the magic that happens when you bring people together. So for me, if I can be that plug, that connector it makes me happy,” she says. Mignott and her team will also have the opportunity to put more people of color on stage on a global stage during the Cannes Film Festival in 2019. “We’re doing the biggest diversity event in the world on June 19th. It’ll be called Inkwell Beach Cannes at the Cannes Lions Festival. It will be the very first cultural creativity summit at the Cannes Lions with the full support of the Cannes Lions,” she shared. The five-day activation with a variety of conversation that features a variety of people of color on an international platform.
TOPICS:  Black Entrepreneurs Technology