As the one-womanshow behind Heckle Her, a burgeoning production company based in Austin, TX, Dawes is putting writers and performers of color center stage. Over the past two years, she has been at the helm of two wildly successful and now, award-winning productions, Love Me Tinder and Doper than Dope—the latter a re imagining of the iconic 90s show, In Living Color.

Possessing a flair for the creative and a commitment to creating entertaining content, Dawes is determined to make sure the humanity and humor that define people of color is equal and apparent in her productions. With numerous awards and prizes under her belt, she’s sharing her journey to success, her biggest lessons learned and what it’s really like to be an artist at a time when opportunities are slim for people of color. 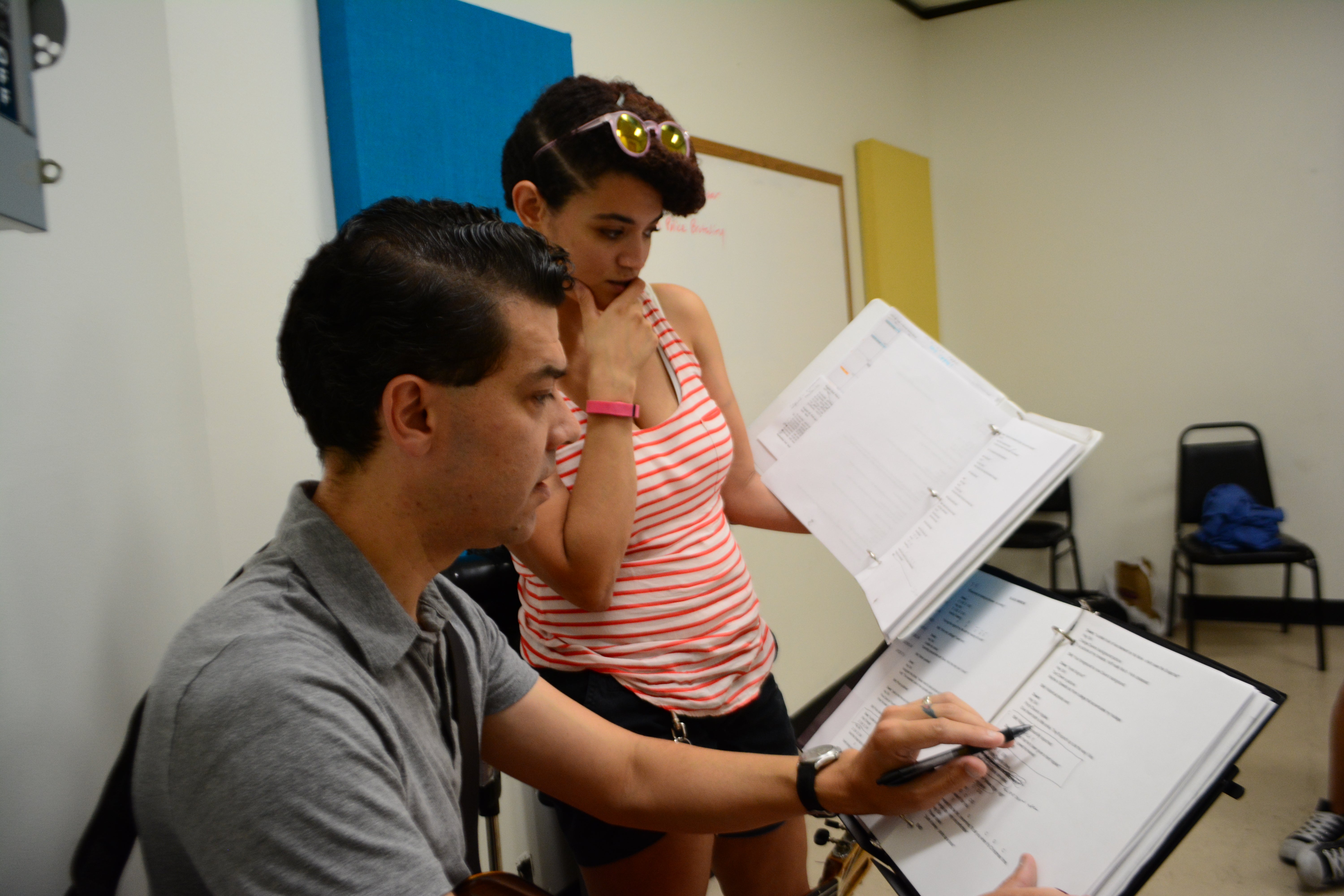 The gig: I write, direct, and produce original comedy for stage and screen. My most recent project “DOPER THAN DOPE” is a 90s-themed sketch show inspired by TV comedies like “In Living Color” and “House of Buggin’.”

The journey: Heckle Her began as an outlet for me to produce my own work in Chicago but when I moved back home to Austin, I found that the lack of diversity (particularly in the comedy community) was something I could immediately impact just by creating and producing new work on my own. There wasn’t anyone else in town making the kind of work I wanted to see so it became my second full-time job: make the kind of shows I would want to buy tickets to. Write the kind of roles that I would want to play. And direct the kinds of shows that I would want to audition for.

Her humble beginnings: I have always been a really shy, polite, introverted kid so no, I don’t think anyone saw a career in theater/comedy coming. I have always been a writer though, so I always hoped that would continue to be a big part of my life. I’m really lucky and really happy with how it’s all turned out.

Why it’s important to create content that represents not only women, but also people of color: I think the most important thing is that we see ourselves onstage and onscreen. It’s also important that we have equal opportunities to tell our stories ourselves. We’re pushing up against this heavy history of TV/Film and Theater industries systematically shutting out people of color. We’re not “in the room where it happens,” when it comes to lead creative roles. So even though my work is on the smallest of small scales (created primarily in my hometown), even if all we’re doing is cheesing on some silly 90s riff about “What an all Black ‘Friends’ TV show would look like,” the work feels really important. To steal a quote from Courtney Kemp Agboh, “My job is to make a great f—ing show so the next time a woman wants to run her show, somebody says, ‘Yeah, she can do it because that other bitch did it.’”

Her creative influences: I have so much respect for performers that are also writers: John Leguizamo, Mindy Kaling, Donald Glover, Richard Ayoade and Danai Gurira. 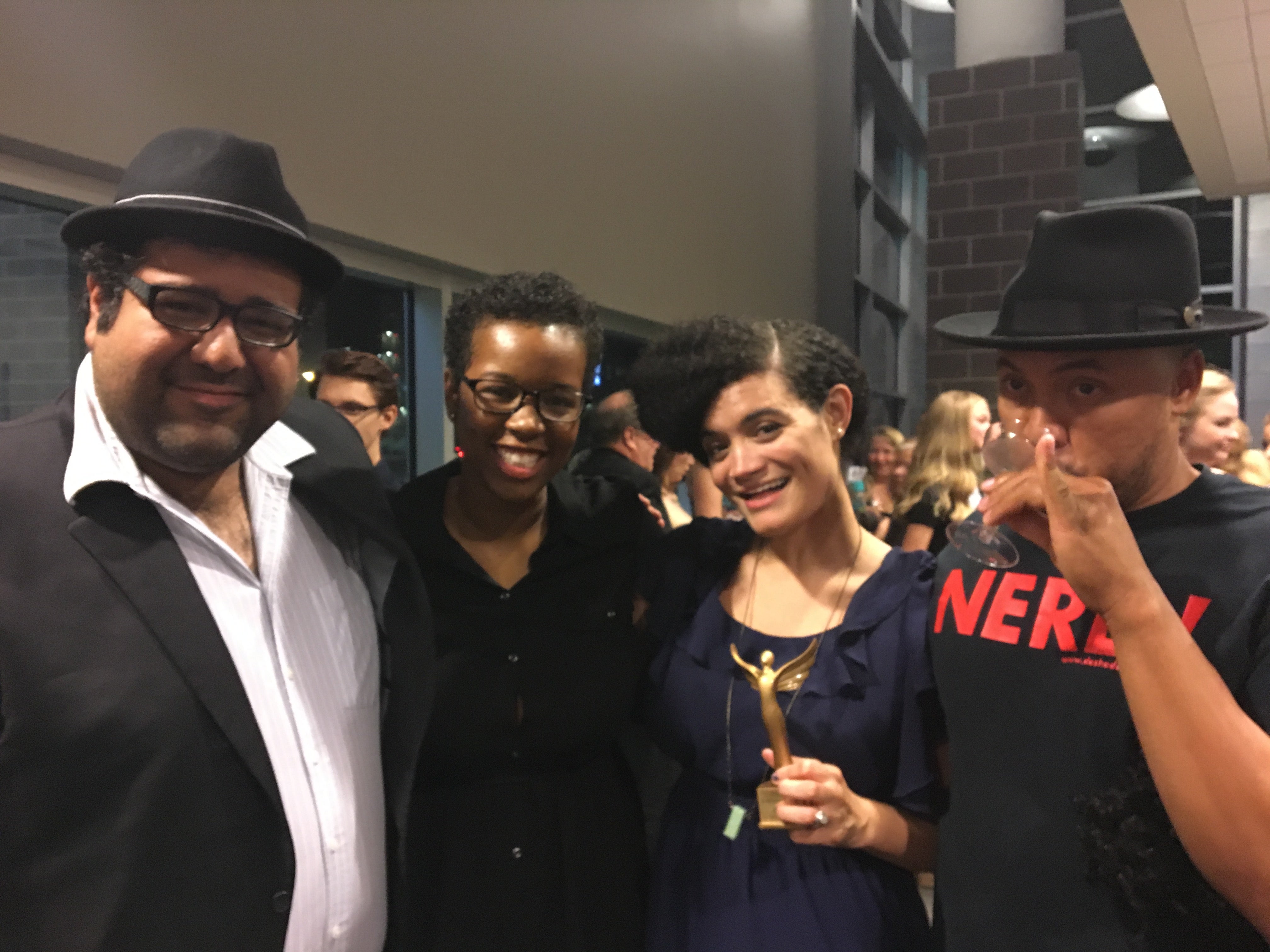 Best on-the-job perk: I love that moment when we earn the first solid laugh in a performance. Hopefully it’s early on because then we know the audience is OURS and we’re in for a really fun show. I also love being able to hire talented performers of color and have a front row seat in the rehearsal room to watch them create new work.

The biggest misconception about the industry: “There are just no good performers of color! We try to cast them! But they don’t show up!” I hear this ALL the time in Austin and to me it is just utter and complete bullshit. What I hear is that producer or director is unable to step outside their “bubble” to meet anyone new. What I hear is a production company talking the talk but not walking the walk in terms of active outreach within their community. What I hear is laziness and stupidity.

Confessions of a black woman in entertainment: I think the biggest challenge is being seen and heard. There is always some gatekeeper along the way that questions why you’re here, why you’re in the room, why should we listen to you or give you anything? I think it takes a lot to stay in the game and keep focused on the work when the consistent message seems to be “You don’t belong here.” Half the game seems to be just keep showing up, despite all odds.

Why she keeps grinding: I think one of the benefits of being a Black theater artist is that I’m in a position to connect directly with audiences of color in my community. We are all so hungry for new work that directly reflects our experiences and we get such a limited scope in terms of how our humanity is shared onstage and screen. It feels really wonderful to be one of the local artists actively creating opportunities for people of color and women in Austin.

Her biggest lesson learned: I put myself in this mindset that there was just one way to be successful and if I failed at that, I failed at being an artist. Period. It’s so funny to admit this now, but I truly believed that if I didn’t get my MFA in Playwriting that it was all over for me. Getting rejected from every school I applied to was a gift in disguise. Four years later, I’m doing exactly the kind of work I’ve always wanted to make with people I love and respect. It took me a long time to see that failure as a gift, but it absolutely has been an important lesson that the path is not the same for everyone and that I should just try to enjoy the journey I’m on.

Her biggest career accomplishment: I have never sold out an entire run of a show before and we did it TWICE this year with two different productions. “Love Me Tinder,” a musical sketch comedy revue about dating in the digital age, sold out every performance at Salvage Vanguard Theater, and then “DOPER THAN DOPE” sold out all 9 performances of our July run at The Institution Theater. It was amazing to see audiences so excited about the work, because as artists, we felt so excited to make it. On top of everything, we won 5 B. Iden Payne Awards this season. It is pretty much unheard of for a sketch revue to compete at the same level of full-scale theater and musical productions.

Best investment she ever made: I think my education at Sarah Lawrence College was a great investment in myself. I really wish that experience was available and affordable to more people because it really taught me a lot about how to be an independent artist, how to ask good questions and how to keep challenging myself.

Her top industry tip: Keep showing up. Keep focused on making your best work – it doesn’t really matter what anyone else is doing or what anyone says. I also think for young writers, especially the really shy ones, make some loud friends that will go with you to theater parties and introduce you to people.

The smartest advice she’s ever received: “Fake it til you make it.” Pretend that you’re supposed to be here and give yourself permission to make your work.

In her downtime: Netflix and crafting.

In her beauty bag: Tarte matte lip tint. Coconut oil for my hair.

Her power accessory: My huge hair. It makes any outfit and goes with everything. I wear it in a huge bouffant that takes me precisely three minutes to style each morning.

Her theme song: “Call Your Girlfriend” by Robyn because it’s always an invitation to try to recreate that music video no matter what your location.

On her bucket list: I really want to become fluent in another language. I studied French in college for a few years, but missed out on an opportunity to study abroad. I still regret it.

If I could have lunch with any woman it would be_____: Ava DuVernay. Her work is always so thought provoking and inspires such important conversations. I have many big important questions to ask her about being an artist and sustaining a career, but I also wonder if she likes to sing karaoke and if so, what is her favorite go-to song.

What’s next for her: Heckle Her’s award-winning 90s inspired sketch show “DOPER THAN DOPE 2” performs for 2 shows at Spiderhouse Ballroom in Austin, TX on December 8th and 16th. “DOPER THAN DOPE 2” features a fly girl dance team, DJ Mahealani, and a diverse ensemble of writer-performers. Tickets are available online www.heckleher.com/dope and as I will be moving end of this year, it could be the last Heckle Her show for a few years!