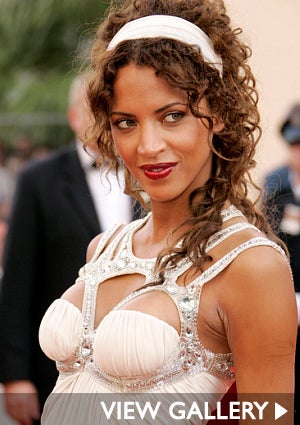 When Usher’s “Hey Daddy” video premiered, we were so excited to see that it starred one of our favorite models, ever: Noemie Lenoir!  Discovered by Ford Models in Versailles, the French-born, bi-racial beauty started modeling at 16–but it wasn’t until she signed with L’Oreal in 2001 that her career hit the stratosphere. Soon after, she began working for Victoria’s Secret and Gap; racking up editorial credits in all the top fashion magazines; and posing for the all-important Sports Illustrated Swimsuit Issue (with her stormy eyes and glorious corkscrew curls, Lenoir was one of the issue’s most popular pinups). Ultimately, supermodeldom wasn’t enough for the gorgeous 30 year-old–in the past decade, she’s become quite an accomplished indie actress, appearing in a series of award-winning, international films. Noemie, we love you! Here, we rounded up some of our favorite runway and red carpet pics of the French femme fatale. Read More: