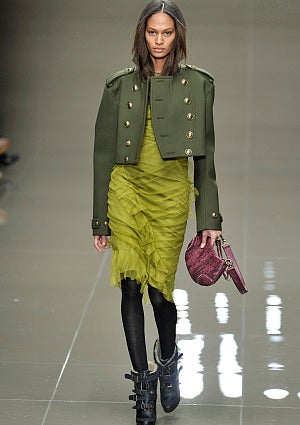 The utilitarian trend is making a big impact on the fashion scene right now. For spring 2010, designers showed a number of looks that featured military references from epaulets to tailored cargo pants to olive green hued pieces. The military frenzy has already taken off with safari or military jackets flying off the shelves. The army jacket will be the go-to staple for this spring when it comes time to store your winter coat. Fashion’s current pre-occupation with all things utilitarian is nothing new, this love affair has withstood the test of time and continues to pop up on our style radar time and time again. This is the kind of reliable trend that is worth jumping aboard since there’s really no expiration date on it. No wonder fashion cool girls like actress Joy Bryant have long been spotted layering their trusty military jackets over everything from gowns to denim shorts. It goes to show you just how versatile and functional a military inspired jacket can be. Having been M.I.A. from the fashion vernacular for some time, the military trend feels fresh again. No need to be literal with this trend or you can risk looking like G.I. Jane with a head-to-toe look. Instead, pair your military jacket (add a belt for a cinched-in silhouette) with polished feminine pieces to play up the contrast of hard and soft. If sexy is what you are going for, throw a utilitarian jacket in khaki or olive green over a pair of black leather pants like the looks at Balmain or with over-the-boots for a masterfully tough lux interpretation. There are a slew of versions on the market from the original style that can be purchased at your local surplus store to embellished designer ones at every price point. Judging from the fall 2010 shows, spring’s military trend is here to stay, at least until next fall. We’re obsessed with all the military influenced outerwear, aviator shearlings, meticulously cut wool coats and jackets at the recent Burberry Fall 2010 show in London. We’re especially loving the styling! Designer Christopher Bailey hit the mark when he sent Joan Smalls out in an oversized cropped olive jacket with gold epaulets and buttons over a light-as-a-feather dress with heavy-duty boots. Read more: