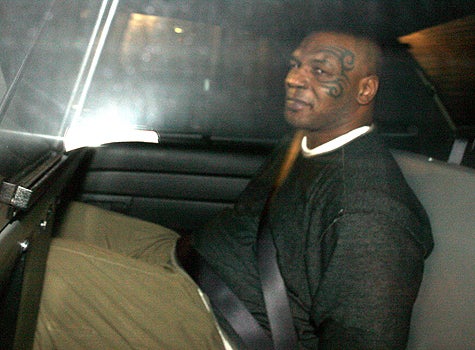 UPDATE 11/15/09: An outspoken Arizona Sheriff Joe Arpalo released a statement to TMZ that, if a Los Angeles judge decides Tyson violated the terms of his probation from a DUI and cocaine conviction in his state, Tyson will be serving time at the Tent City jail.

He says: “Mike Tyson has served time in the Tents before and if he violated the terms of his probation here in Arizona, he better get his jail time done while the weather in Phoenix is cool and not 140 degrees in the summer time.”

The Tents Jail are leftover military tents set up in an area adjacent to the Maricopa County Jails in Phoenix, Arizona. They were assembled several years ago when Sheriff Arpalo, faced with jail overcrowding, decided he did not want to release any inmates and housed non-violent inmates in these makeshift tents.

Tyson, who spent one day in Tent City jail, was required to wear the jail-issued pink underwear and a black-and-white striped jumpsuit.

Tell us what you think: Do the comments of this Arizona Sheriff seem appropriate?

Tyson Says He Was Defending His Family

Mike Tyson allegedly got into a little brawl with a photographer at LAX, but like good citizens the two made citizen’s arrests of each other. Local Sgt. Jim Holcomb told People.com that Tyson hit the photographer in the head, which caused him to fall down and withstand a laceration in the head. The photographer was carried to the hospital and Tyson was arrested and his bail was set at $20,000.

The boxing legend, who was traveling with his wife and 10-month-old baby, was recently sentenced to 24 hours in jail and three years probation due to drug possession and driving under the influence in Arizona.