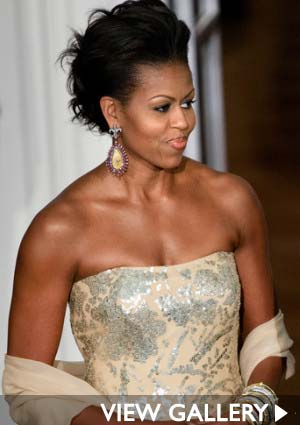 Michelle Obama once again showed everyone in the world why she in one of the most stylish women. At the Obamas’ first State Dinner, the First Lady wowed everyone by wearing a stunning champagne colored strapless evening gown with silver sequin embroidery. The dinner honored Indian Prime Minister Manmohan Singh. With grace and diplomacy, Ms. Obama chose a dress by American-Indian fashion designer Naeem Kahn.

Kahn was born in India and both his father and grandfather designed clothing for the royal families and socialites. As a teenager, Kahn came to the United States and eventually apprenticed for the legendary fashion designer Halston. In 2003, he opened his own line Naeem Kahn. His gowns, like Obama’s, are often embellished with sequins, mirrors and beading that are inspired by his native land.

His designs are feminine, modern and classic with a touch of elegance and Indian flair. Naeem Kahn’s creations have been worn by celebrities like Beyonce and Jennifer Lopez. His collection is sold at high-end stores like Bergdorf Goodman, Saks Fifth Avenue and Neiman Marcus. He is now part of history dressing the stylish and sophisticated Michelle Obama.

What did you think of the First Lady’s gown?