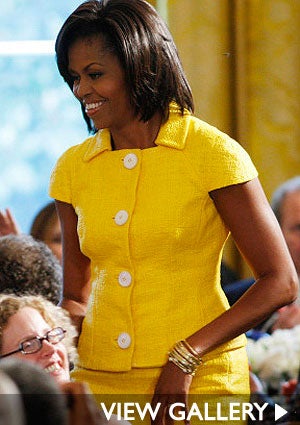 Mainstream media is feeling the heat of the rise of a new icon representing a new standard of beauty: America’s First Lady Michelle Obama.

Certainly there are other Black women playing major power positions in mainstream media, Beyonce and Oprah for example, but this Lady O represents a paradigm shift on the White gaze on Black beauty. She is not here to entertain. She does not fulfill the familiar “from battered to beautiful” scenario the culture expects of Black women. Michelle Obama has no horror stories for her to overcome, no super-human stamina. She comes from a solid hardworking American family. She is smart. She is strong. She went to public and Ivy League schools. She works hard. She is successful. She is loved. End of story. Oh yeah, and she’s happily married to the Nobel Peace Prize-winning (fine) President of the United States.

With nothing in her story to pity, nothing mystical (she’s even too sharp and smart for White men to twist into a sexual fetish), what does Michelle’s uneventful extraordinary life and style do to the mainstream image of beauty? Much of White mainstream identity has benefited from and counted on Black women being portrayed as sick, poor, ignorant, abused, and sexually deviant or just a loud hot ghetto-mess. Our pitiful position secured, and in some ways created, their position on the pedestal. What now? Is it really time for the White standard of beauty to step off?

When the identity of an entire culture and industry is dependent upon the negation or the degradation of the beauty or even existence of another (there was not one featured Black model in Vogue’s historic September 2007 biggest issue ever) what happens when that very image is dominating media all over the world? What happens when a society addicted to the image of White women is faced with the inevitable existence of Michelle Obama representing many other women like her?

The emergence of Michelle Obama is the start of a new conversation about Black beauty and identity. It is one that must be had across generations, gender and race. What Michelle represents is real freedom for Black women to define their own authentic beauty and not as it compares to those who have been historically glorified. Michelle brazenly wears belts, cardigans and shorts wherever and whenever she feels fit. She does not let Vogue or Ebony tell her what to wear. We love her for owning her own story. When Black women get free with creating their identity, others must be prepared.

So we have to engage some of our sisters and inform them that Michelle has ushered in a post-ho era, and they can pack away their “stripper couture.” We have to remind all men that self-esteem is sexier than submission. And we have to enroll White women into the conversation, because there can be no slave girls, wet nurses or mammies without mistresses, both sides have to give up their positions and officially end the game.

Tell me, what happens now that the forgotten woman is the First Lady?

Michaela angela Davis is an accomplished speaker and writer who has worked for a plethora of publications including ESSENCE, Honey and VIBE magazines. She was recently the moderator for a New York City panel discussion entitled “From Hottentot Venus to the White House: Black Women on Beauty and Bodies.”

The views and opinions expressed in this commentary are solely those of Davis and do not reflect those of ESSENCE or ESSENCE.com.