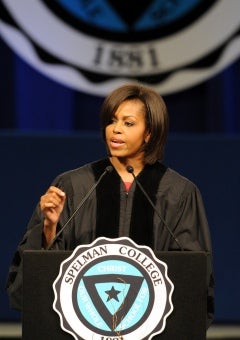 First Lady Michelle Obama took to the stage in front of 550 Spelman graduates to deliver the commencement address and receive an honorary Doctorate of Law degree this weekend.

Thousands were in attendance as the First Lady inspired the graduates. “It is vitally important that you all rise to the highest ranks of every industry and every profession,” she said. “As you climb those career ladders, just remember to reach down and pull others up behind you

The First Lady spoke to the women about using their education to serve others and make a positive impact on their communities. She also encouraged the graduates to remain focused despite challenges that they may face.

“I want you to think about all those women who came before you,” she added. “They didn’t go around pointing fingers and making excuses. They focused on what they did have… their intellect, their courage, their determination, their passion.”