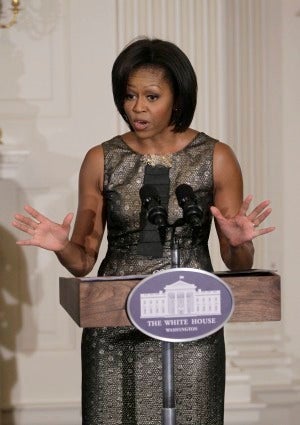 In honor of Black History Month, First Lady Michelle Obama hosted an interactive workshop for 100 students at the White House. “The Sound of Young America: The History of Motown” celebrated the legacy of the Detroit powerhouse that brought us Diana Ross & the Supremes, Smokey Robinson and Michael Jackson & The Jackson 5.

Robinson joined Motown founder Berry Gordy, John Legend, and the executive director of the Grammy Museum to explore the hit-making record label’s beginnings and why it still matters today. Gordy said he borrowed $800 from his family to start Motown and his only goals at the time were to “make some music, make some money and meet some girls.” He quickly saw that Motown’s soul-infused lyrics could be used to alleviate some of the racial tension that permeated the 1960s.

“During that time, it was the time of King and Kennedy, it was a time of marches and rallies and groundbreaking civil rights laws. And Motown’s music was so much more than just a soundtrack. It was a heartbeat,” Mrs. Obama said.

She hoped Thursday’s hour-long discussion would inspire young people to cultivate a future in the arts.

“I hope you realize through this experience that no one here is any different than you all are, whether that’s Smokey Robinson or John Legend or me or my husband, because we are all reflected in you. We see ourselves in you,” Mrs. Obama said.

The students, who hailed from Illinois, Ohio, Michigan, California, Minnesota, and Washington, clapped and cheered when Legend took to the piano to perform “Love’s In Need of Love Today.” Stevie Wonder, whom Mrs. Obama deemed as “her favorite,” originally recorded the song.

Later that evening, the White House hosted a tribute concert to Motown with performances by both Robinson and Legend, Jamie Foxx, Ledisi, and Glee’s Amber Riley. Catch the television broadcast on March 1 at 8:00 pm on PBS.