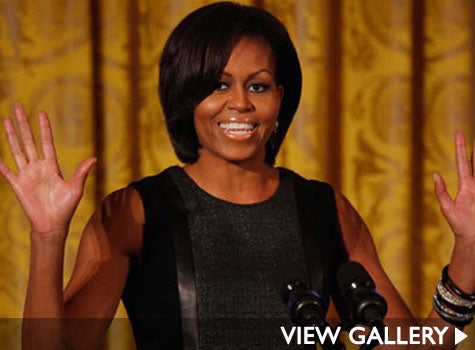 At 6:30 a.m., a little brown-skinned girl, living on the Southside of Chicago, got out of bed and traveled an hour and a half to get to school because she wanted the best education. Thirty years later, she would share this same story at a Washington, D.C. high school as the First Lady of the United States.

On Wednesday, Michelle Obama visited Ballou High School and spoke to students about her childhood and the experiences that led her to the White House.

“I know what it feels like to struggle to get the education that you need. In so many ways, I see myself in you all. And I want you to see yourselves in me, so that you’re not looking at me just as the First Lady of the United States,” Mrs. Obama said. “…But my parents didn’t have a lot of money, and I went to public schools my entire career. So there’s not too much of a difference between how I was raised and how many of you all are raised. But I’m here, and the point is, is that you can be here, too.”

Before the First Lady arrived, the high schoolers whispered excitedly amongst themselves. Some could hardly believe they were really going to see her up close and personal. Once she stepped through the door, they clapped and cheered before finally settling down to listen intently. Mrs. Obama, wearing a cropped jacket with a flowery print and brown pin-striped slacks, urged the students to think about their career goals before going to college.

“You don’t want to be in 12th grade thinking about that stuff. You want to think about it now, because the rest of the country and the world, the kids who are going to get these opportunities are preparing themselves every single day. So you don’t want to wake up one day and start trying to get it together. Get it together now,” Mrs. Obama said.

Her visit was a part of the White House’s final celebration of Women’s History Month. That day, the White House hosted a mentoring series with a group of distinguished women from all professions including former WNBA player Lisa Leslie, actresses Tracee Ellis Ross and Kerry Washington, and singer Ledisi. The women mentors visited six D.C. high schools to discuss their backgrounds and encourage students to work hard and follow their dreams. In the evening, Mrs. Obama hosted a dinner and performance for the 20 mentors and 120 local students in the East Room of the White House.