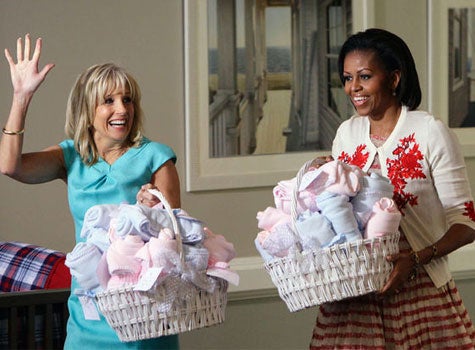 First Lady Michelle Obama and Dr. Jill Biden embarked on a five-city, two-day tour to crusade for military families. On April 12, the pair launched “Joining Forces,” a national initiative to honor military members and offer support services for their communities.

On Wednesday morning, Mrs. Obama and Dr. Biden teamed up with Martha Stewart to throw a baby shower for 40 expectant moms at Camp Lejeune, North Carolina. They strolled in carrying baskets of onesies, blankets, diapers, and other sponsor-donated items — including a $600 crib for each woman.

Many military wives, forced to handle pregnancies alone while their partners are deployed, often feel overwhelmed and consumed with even more stress than the average pregnancy brings.

“Operation Shower is one of the ways that communities can really gather around new moms, or even second- and third-time moms who are expecting,” Mrs. Obama said. “…One of the things that most Americans don’t realize, is that you guys have to do this alone sometimes, and you’re doing it not knowing whether your spouse is okay… which adds to the stress.”

Next, the two hopped on a plane and flew to San Antonio, Texas where they honored wounded soldiers at the Warrior and Family Support Center. They met privately with the warriors — many of whom had been burned or lost limbs in combat. Mrs. Obama said their resilience and strength inspired her. She commended the Support Center, which is maintained through community donations and volunteerism, for creating a resource center for service members. “We want to travel the nation, showing and lifting up and shining a light on models like these to give people around the country the inspiration and the ideas they need,” Mrs. Obama said.

The First and Second Ladies hit the road again to participate in a baseball game with Denver, Colorado kids whose parents are in the military. The next morning, they hosted a National Math and Science Initiative competition between military parents and students. According to the White House, about 1.9 million U.S. children have parents serving in the military, including about 220,000 with parents currently deployed. Dr. Biden, who is a military mom, and the First Lady want to raise awareness for children’s needs while their parents are serving the country.

Their tour continues in Ohio as the duo spreads Joining Forces’ motto of “Everyone can do something.” Find ideas on how to get involved by visiting joiningforces.gov.

These Celebrity Beauties Never Hit A Red Carpet Without The ...

Everything We Know About 'Good Times'' Star Ja'net Dubois' D...