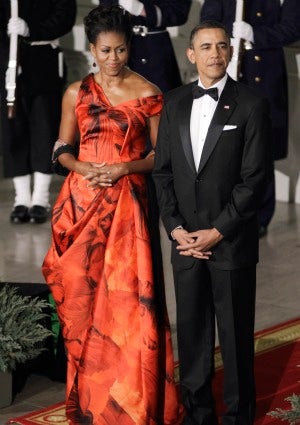 This weekend, I was reading my friend Kevin Harry’s Facebook posting and started to react to the discussion online about the First Lady’s fashion choice — “State Dinner Review: The Obamas Got Everything Right, Except Michelle’s Dress” on VanityFair.com.

Lisa Bonner commented: “BOOOO! I loved her dress, that look was EVERYTHING!!!”

I commented: “BOOOOOOOO!!!!! I love that one of the most talked about issues of the week — aside from Health Care, Education, and Gun Control is Michelle Obama’s choice in an Alexander McQueen dress. Seriously?!?”

Ralph C Sauls commented: “Michelle WORKED the damn thing, okay!!! Besides, it’s about time that we got a First Lady in ‘the House’ with some of that good old ‘Sisterly BangBoomPow’ with which to fill any beautiful evening gown! Sista First Lady gets my vote.”

This got me to thinking about this hot topic on the blogosphere of “The Controversy of The Red Dress,” as I am now calling it. I decided to post a poll on Facebook to see what our audience thought about the FLOTUS choice.

What did you think about First Lady Michelle Obama’s red Alexander McQueen gown?

4 percent voted: Not so much.

10 percent voted: It’s pretty, but not my style.

*At the time I wrote this blog there were 132 respondents who took the poll, 115 people “Like” the post, and there were 74 comments.

Some of the comments went as follows:

Joylyn Forte commented: “MICHELLE HAS HER OWN STYLE…WE LOVE WHATEVER SHE CHOOSES TO WEAR SHE IS THE FIRST LADY! RESPECT!”

Rhandi Seiler commented: “I didn’t know what was going on with that dress!!! It didn’t fit her right…sorry!!!”

Kimberly Thomas-Kelley commented: “She looked amazing to me and I am so over people saying she’s no Jackie O. Did she ever say she wanted to be Jackie O? She’s the one and only Michelle O and an incredible one at that!!

Monique Moon commented: “Should have been a bit more conservative with that style.”

And the discussion went on…

“Michelle Obama’s State Dinner Dress Bashed By Oscar De La Renta” was the headline posting on The Huffington Post. The Dominican fashion designer told WWD: “My understanding was that the dinner was to promote American-Chinese trade — American products in China and Chinese products in America. Why do you wear European clothes?” Adding, “I’m not talking about my clothes, my business. I’m old and don’t need it. But there are a lot of young people, very talented people who do.”

Which is an ironic notion since the First Lady has been a passionate supporter of young American fashion designers — in fact she has worn a dress by Moses De La Renta, Oscar’s son. The First Lady has consistently made style statements wearing new and up-and-coming designers. For her husband’s inauguration she wore a gown created by wunderkind Jason Wu. She has also rocked clothing by newer designers like Prabal Gurung, L’Wren Scott, Maria Pinto and more established American designers like Marc Jacobs, Calvin Klein, and Donna Karan. And least we forget the FLOTUS support of J.Crew.

Just last year, The Harvard Business Review released a report that First Lady Michelle Obama had created a $2.7 million stimulus for the fashion industry based on 189 public appearances for November 2008 to December 2009.

So, is all of this talk, criticism, and discussion about Michelle Obama’s gown a statement about her fashion sense, loyalty to American fashion designers, Chinese and American trade issues as it relates to the global economy, or was this simply a personal attack?

It feels more like the latter. I think people have a lot of free time and they are spending it on social media. And that First Lady Michelle Obama is a rock star and people just want to to have something to say. As Jill Scott sings, “Hate on me hater, now or later / You can hate on me.”

What did you think about First Lady Michelle Obama’s gown?