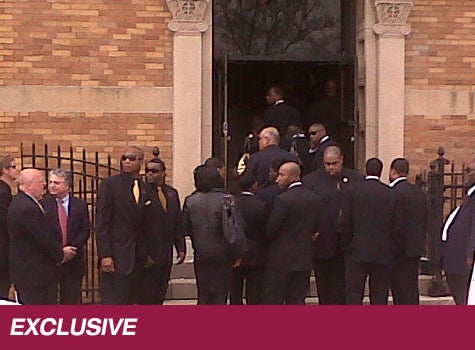 It is obvious that Michael Muchioki is loved by his Alpha Phi Alpha fraternity brothers. The men showed their support today as hundreds of members packed the sidewalk at Monumental Baptist Church in Jersey City, New Jersey, most dressed in midnight black suits sporting long bright yellow ties to gray haired men walking proudly with Alpha Phi Alpha medallions. “He was very active in the fraternity. He attended our Leadership Academy at Johns Hopkins University that helps our brothers understand their commitment to the community and mentoring young kids,” said National President of Alpha Phi Alpha Fraternity, Herman Mason, Jr. Muchioki, 27, and his fiance Nia Haqq, 25, were robbed and shot to death last weekend in what police describe as a botched carjacking in Jersey City. Unlike Nia Haqq‘s funeral yesterday, where mourners talked and reminisced, remembering Nia’s life, the attendees today were predominately men who were silent but spoke through their body language: From long hugs embracing each other to nodding their heads in disbelief while wiping tears from their eyes. Look at exclusive images of Nia Haqq and Michael Muchioki. “Me and him used to go out all the time. I just can’t imagine my life without him,” said Michael’s first cousin, Sterling Mitchell. His eyes water up. “I just don’t understand how something like this could happen to an innocent person. He was just beginning to start his life. I don’t think I will ever get over this one,” Mitchell said turning away. After the service, Sandra Muchioki, Michael’s mother, said: “I don’t want to talk today. Today is all about Michael.” Nia Haqq’s mom, Majeeda, had no problem raving about her soon-to-be son-in-law. “I have never given my daughter a blessing with any man until I met Michael. I pulled her aside and said, ‘He is phenomenal.’ I told him that he had my blessings. I told my daughter you only meet one or two in a lifetime and he is the one. My family can tell you, whenever Nia brought a guy home we gave him the evil eye. But when Michael came in, we had our arms open wide. He was a wonderful, wonderful man.” Although Nia Haqq and Michael’s story has made a viral impact on Facebook, Twitter and YouTube, with thousands of comments, national media outlets have let this story pass right by. The  President of Alpha Phi Alpha, said he was “shocked” the story did not make national coverage. “I hope it is not that they think this is just another act of gun violence. This incident is more than that, it shows the state of America, not just Black America, but that we have to do more to stop this.” Read More: