By Geneva S. Thomas · Updated October 27, 2020
The Black community in Mobile, Alabama is shaken after 19 year-old Michael Moore was shot and killed by police the evening of Tuesday, June 13 in Toulminville, a neighborhood in Mobile, Alabama. Tragically, Moore’s shooting comes only three months after the 35th anniversary of another young man’s murder in Mobile who shares the same first name: the racially-motivated lynching of 20 year-old Michael Donald by two members of the Ku Klux Klan. That story rocked national headlines in 1981, but Moore’s story has been obscured on the heels of the senseless Orlando shooting. Fox News 10, a local news station in Mobile reports Moore was shot four times by a police officer from the Mobile Police Department named Thursday as Harold “Harry” Hurst. According to Police Chief James Barber, Moore was suspected of driving a stolen car and pulled a gun from his waistband during a traffic stop. Members of Moore’s family, however, say police statements are not factual. “The narrative is always to muddy the victim,” Moore’s cousin Lataija Walton-Days said. “He didn’t get pulled over because the car was suspected stolen, it was because the police said he cut off another driver, which he didn’t do.” Walton-Days suspects the police pulled Moore over because he was driving an expensive car. “Why was he driving a stolen car? Because it was a white Lexus? It was no reason for it to happen.” The Mobile police told Fox News 10 Hurst was not wearing a body camera so there is no video footage of the shooting. “We have family in law enforcement and this is the hardest part for us,” Walton-Days revealed. Why Are People More Concerned About A Rare Gorilla Than a Black Child? The family’s representative DJ Larry, who was with Moore’s family at University of South Alabama Medical Center when the attending physician confirmed Moore’s death, says he loved basketball and was a respectful kid. “Michael was a fun, loving kid. Basketball was his passion and he was one of those kids who just liked to be a kid, even though he was getting older”, Larry told ESSENCE. “He just enjoyed life and church and was a respectful kid.” 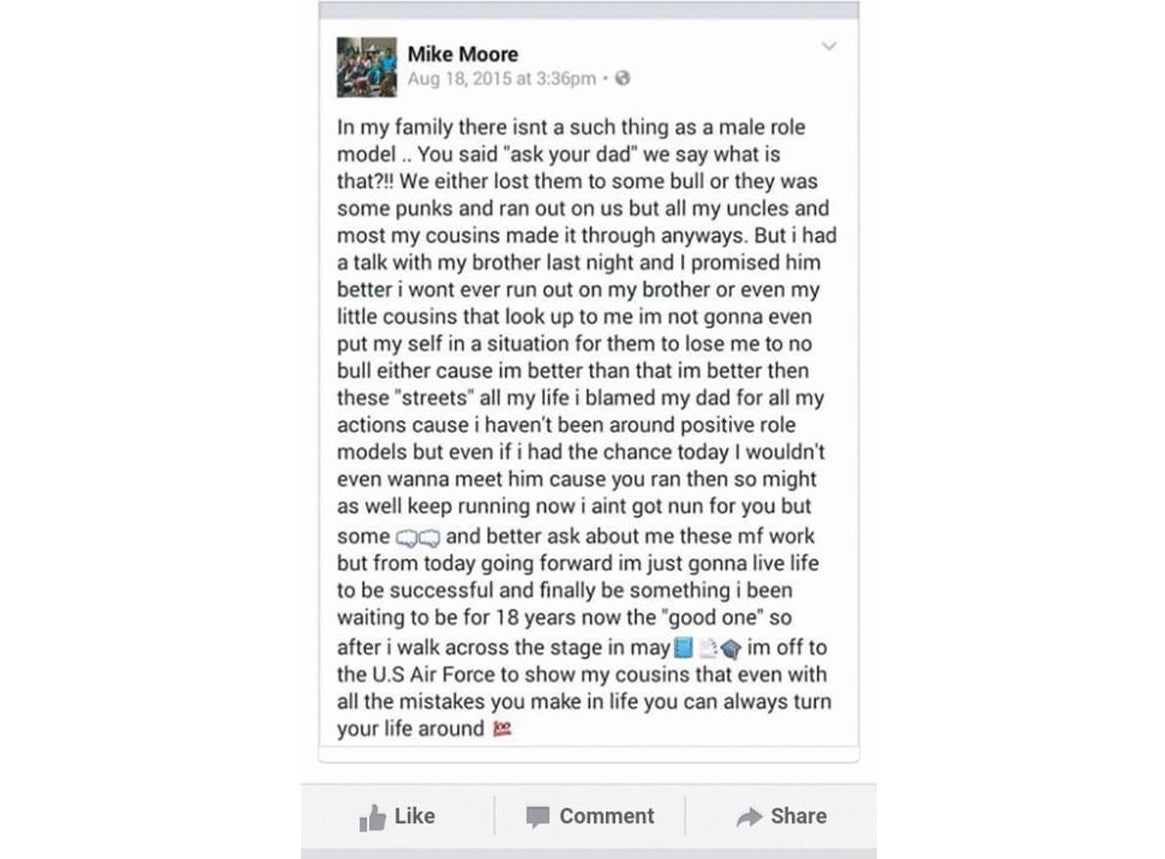 ESSENCE was able to track down a Facebook post Moore wrote nearly a year ago in August months before his senior year in high school where he expressed frustration at his father’s absence in his life and his dreams to join the Air Force. “In my family, there isn’t a such thing as a male role model…You said ‘ask your dad’. We say, ‘what is that?!!’ Moore goes on to say he had a talk with his brother and promised him better. “I won’t ever run out on my brother or even my little cousins that look up to me. I’m not gonna even put myself in a situation for them to lose me to no bull either cause I’m better than that.” Members of the community have held protests and the family plans to continue the fight for Michael. “We are committed to finding justice for Michael. We know the stories given to us by law enforcement are not accurate and we will continue to fight until justice is served,” Larry continued. A candlelight vigil will be held by the Moore’s mother Shunta Daugherty and family at the scene of the murder Saturday, June 18 at 7pm. WANT MORE FROM ESSENCE? Subscribe to our daily newsletter for the latest in hair, beauty, style and celebrity news.