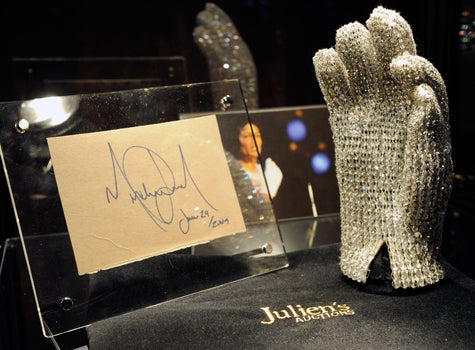 The world’s most famous right-hand glove sold for $190,000 at an auction on the first anniversary of its owner, Michael Jackson’s death. Jackson first wore the white Swarovski crystal-studded glove during the 1984 Victory Tour with his brothers.   Originally expected to sell for $30,000 the glove’s new price tag far exceeded expectations. “People flew in from Asia, Russia, all over. Now that he’s gone, we now realize the true legend we lost,” Darien Julien of Julien’s Auctions, which ran the auction told the Associated Press. The winning bidder was Wanda Kelley, a fan and collector from Los Angeles. “Let’s just say I wasn’t walking out of here without that glove,” she said. The auction included 200 items of Jackson’s memorabilia. A pair of loafers worn he wore, which were estimated to be worth between $2,000 and $3,000, sold for $90,000. A white fedora he wore sold for $56,250 and an autograph he signed the day before his death — June 24, 2009 — sold for $21,000. Tags: michael jackson, michael jackson glove, michael jackson memorial, michael jackson auction Description: Michael Jackson’s famous crystal-studded glove sold for $190,000 at auction — ten times it’s estimated worth.