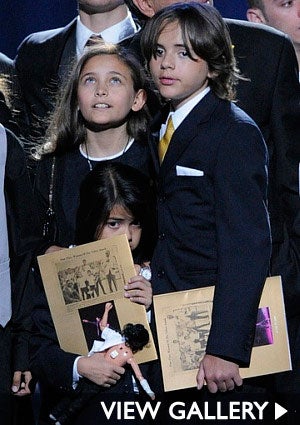 Eight months after their father’s death and the media scrutiny that followed, Michael Jackson’s three children Prince Michael I, 12; Paris, 11 and Prince Michael II (“Blanket”), 7 are said to be coping well while living with their grandmother Katherine Jackson and nanny Grace Rwaramba who has cared for them since birth. Katherine’s lawyer tells People the children are “doing great, thanks to the love and support they’ve gotten.” “Katherine really listens to the kids,” he adds. “She wants to give them a sense of freedom when she can. She wants to encourage them.” Katherine and Rwaramba are working to give the children as normal a life as possible, adds a family source. Part of that means allowing them to walk around in public without the masks their father insisted on. “They like not wearing the masks. It’s a different experience for them,” said the source. Not suprisingly, Michael Jackson’s influence lives on through his children. “Talking to Prince is like talking to Michael,” adds the family source. “He’s so smart and mature – way beyond his age.” Paris wants to follow in her father’s footsteps and become a singer.