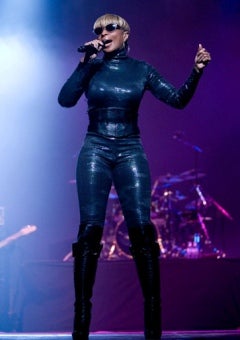 ESSENCE Music Festival headliner Mary J. Blige will hit the stage this Sunday at the Billboard Music Awards for a live performance alongside rapper Lil Wayne.

The two will perform Mary’s new single, “Someone to Love Me,” which will appear on her upcoming album, “My Life II: The Journey Continues.”

In addition to MJB and Lil Wayne, other stars set to perform include Nicki Minaj, EMF headliner Trey Songz, Ne-Yo, Snoop Dogg, and the Black Eyed Peas. Pop diva Rihanna, who is nominated for a whopping 18 awards, will also take to the stage for a high-energy performance.

The Billboard Music Awards will air on Sunday, May 22 on ABC. The show will be broadcast live from the MGM Grand Garden Arena in Las Vegas. We will definitely be tuning in! Will you?