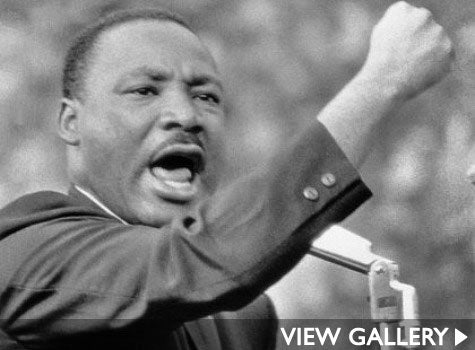 This Easter Sunday marked the 42nd anniversary of Martin Luther King Jr.’s assassination in Memphis, Tennessee. As the U.S. army fights two wars in the Middle East, many news publications are looking to another infamous day in the life of MLK. Exactly one year prior to his death, on April 4, 1967, at Riverside Church in New York, King emphatically voiced his opposition to the Vietnam War. “Now it should be incandescently clear. No one who has any concern for the integrity and life of America today can ignore the present war. If America’s soul becomes totally poisoned, part of the autopsy must read: Vietnam.” That speech marks the beginning of King’s most radical year. Huffington Post Columnist Byron Williams calls it, “an unwavering commitment to those on the underside of life.” In the art world, New York’s Bronx Museum is remembering King’s legacy of speaking for “those on the underside” with two exhibitions–Road to Freedom,” which features photos of MLK and Coretta Scott King and other civil rights protesters, and “After 1968,” featuring new works from African American artists born in or after 1968. Both shows run until August 11. Here, ESSENCE.com looks back on the leader’s life in pictures. Read More: