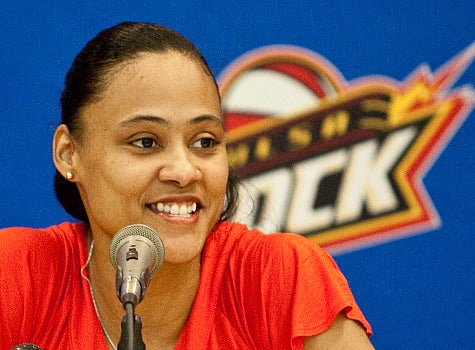 After what must have been an embarrassing moment for Marion Jones–stripped of five medals from the 2000 Sydney Olympics–the former track and field star has dusted herself off, gotten back into shape, and is heading to the Women’s NBA, according to Associated Press. Jones joined the Tulsa Shock team on Wednesday, March 10. Jones served six-months in prison for lying about taking the formerly-undetectable steroid THG and for her part in a 2003 check-fraud scheme. “I said a number of times I made mistakes in the past,” Jones said at a press conference on Wednesday. “I’ve paid for that. Now I’m on to something new.” About stepping back into the spotlight, Jones said, “I knew I’d be a public figure the rest of my life based on my history. I’m certainly not going to go away and hide in a cave and disappear. I’m passionate about what I’m doing and that it’s the right thing.” The rookie, who played ball in college, began prepping for the team sport 10 months ago, AP reported. “I’m extremely excited. I may not be your typical rookie in this league, but I’ll still bring that rookie energy,” Jones said. Read More: