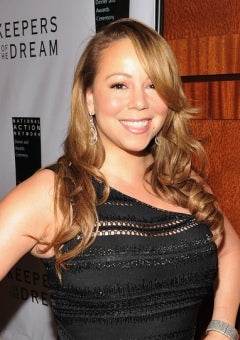 According to Simon Cowell, the rumors are true: mom-to-be Mariah Carey will be joining Simon Cowell on the American version of “X-Factor,” but not as a judge. Cowell confirmed the news in a recent satellite radio interview with Miss Jackie Brown, and also shared a few details about the singer’s role in the upcoming talent-search series.

Cowell revealed that Carey will not be a judge on the show, because they’d “literally have to hold the auditions in a maternity unit.”

He continued, “I think Mariah will have a role on the live shows. I met her recently and… her idea was to be the judge of the judges, which only Mariah could come up with.” Cowell said, “She will be involved in some form, I literally adore her. I love her to bits.”

Rumors about Carey’s involvement had been temporarily squashed because the songstress is due to give birth next month and would not be available to take part in the “X-Factor’s” filming. Although she cannot join Cowell and producer L.A. Reid at the judges’ table, Carey may add a new twist to the typical talent-search format.

With their years of experience and long list of award-winning hits, we would love to see what Carey and Cowell come up with for the show. X-Factor will air on FOX starting this fall.