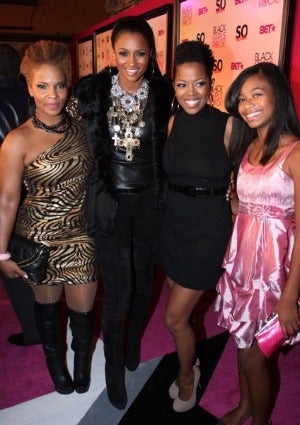 According to The Media Awareness Network, “The most cursory examination of media confirms that young girls are being bombarded with images of sexuality, often dominated by stereotypical portrayals of women and girls as powerless, passive victims.” How are we to ready our teenage girls for womanhood with that type of wicked wind at their faces? At the 5th annual Black Girls Rock! Awards, Ruby Dee and Iyanla Vanzant both reminded us that we must be “mentors” and “midwives” to these young ladies. In order for them to have their best chance at success, we must go before them and give them feet to stand on and legs to walk in the right direction. My 13 year-old cousin Imani Stevens accompanied me to that show which was hosted by Nia Long. Fortunately, Imani has many key, positive role models in her life and already seems to be shaping up to become quite the antithesis of “powerless” and “passive”. I decided to talk to Imani and get her thoughts, just as her journey into greatness is about to commence. MALINDA WILLIAMS: You are so young, yet you own a level of self assurance and confidence that takes many women a lifetime to attain. Where does that come from? IMANI STEVENS: I think I got that from my mom. She always tells me to keep my head up and never let anyone get me down. Also, my grandmother, my Nana. She always gives me good advice. I can always come to her anytime for anything. If I feel down like if someone was talking bad about me, she would tell me, “Imani, you are beautiful inside and out. It doesn’t matter what other people think of you. What matters most it what you think of yourself.” WILLIAMS: We recently attended the Black Girls Rock! awards together. Tell me how you were inspired and what were some of your favorite moments from that show? STEVENS: Well, Ruby Dee inspired me most because she was a poor woman who became a well respected actress, poet and writer. She showed me that even though she didn’t have much, she could still achieve whatever she wanted through hard work and if she just believed in herself. WILLIAMS: When you aren’t feeling your best or something isn’t going your way, what measures do you take to get yourself back on the right track? STEVENS: I go to my room, put some music on and just sit there and think things through. I try to think about how I can make the situation better. Or what may have happened to make the situation go wrong. WILLIAMS: Wow, that’s so insightful for someone so young. It sounds like you understand that while you can’t always control external circumstances, you can control how you will react to them and how you can turn them into positives.  It’s actually really good advice for me. Sit down, Turn on some music and think things through. Thank you Imani. – Tell me, who are some of your positive role models? STEVENS: Raven Simone and Selena Gomez. They both started at a very young age and they both still seem very grounded and humble. WILLIAMS: Why do you think positive role models are important to have in a young girl’s life? STEVENS: A good positive role model can show a girl how to be positive and feel good about herself. They also help us to believe that we can do anything in the world if we work for it and really put our minds to it. WILLIAMS: What does the word can’t mean to you? STEVENS: Ha! It means nothing to me because I don’t believe in the word “can’t”. I only believe in the word “can”. WILLIAMS: Are you aware that you are already a positive role model to both your  friends and family? – And to people who may not even know you but simply see you conducting yourself as a beautiful, intelligent and upstanding young lady? STEVENS: Yes I am aware. WILLIAMS: Is there anything that you would like to add that you think is important for women, young and old to hear? STEVENS: Yes. I would like to tell them that they are beautiful inside and out and they should not change a thing. WILLIAMS: Imani, I understand that you are very humble and don’t always like to “brag” about your gifts and accomplishments. I wanna tell you it’s important that we share our successes with each other. If we are to lead by example then those around us need to see just how bright that example could be. The only way we can be great, is if we aspire to be. But we must first SEE what success looks like and HEAR what it sounds like in order to set our goals and have something to aspire to. Venus Williams plays her sister Serena on the tennis court. Does she give Serena the soft serve hoping not to hurt her feelings or make her sister work too hard? Absolutely not, she is going to hit that ball as hard and as fast as she can, giving Serena everything she’s got. Why? Because she knows that showing Serena greatness will make her respond back with the same. It’s one of the greatest gifts she can give to her sister. An act of love really. Similarly, Oprah Winfrey became a billionaire media mogul. If she had hid that fact from us then we might not even know it were possible for us to become one too. Do not be afraid to be bright and loud about your success. Keep shining!! I love you. For more of “Fast Forward to Fabulous with Malinda Williams,” click here.