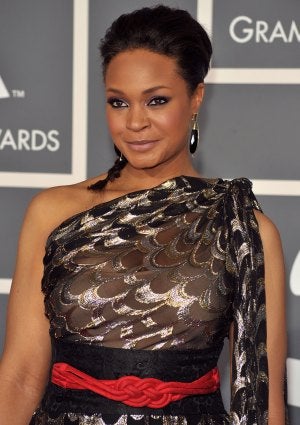 Meet plus-size model by day, and Grammy-nominated recording artist by night Maiysha. The Minneapolis native got her modeling start after she showed up to a casting call for “ESSENCE” and discovered that she had what it takes to get a major contract. Now signed to Ford, Maiysha chatted with YahooShine about getting into the business, her battle with secret binging and how she finally reached a happy place. Maiysha’s debut album “This Much is True” was released on August 26, 2008. Three months later she was nominated for a 2009 Grammy Award for Best Urban/Alternative Performance for her tune “Wanna Be.” The singer/songwriter says she wrote the tune during a career crisis. “Nobody wanted to sign me and nobody wanted to buy my album,” she told YahooShine. “I know for a fact there were deals I didn’t get because I was plus.” Maiysha started secretly binge eating and by late 2006 it was getting out of hand. She would walk through her neighborhood stopping a few times along the way to eat. She traces her relationship with food back to her childhood, when she would travel between her divorced parents’ homes in Minneapolis and Chicago. “There were hours between when I would come home from school and my mom would come home from work. She’d leave stuff for me in the fridge and I would eat. And eat. And eat. It’s the thing so many people have — food as love, food as comfort. It kept me company,” she told YahooShine. Maiysha sought out a therapist and a nutritionist for help. Expecting to lose between 20 to 30 pounds, the model/singer dropped 66 pounds in one year. She began loosing clients, due to her new smaller figure. Since being snapped on the red-carpet at the 2009 Grammy Awards, Maiysha has gained a little weight back, done some soul searching, picked up more modeling gigs and released a sophomore album, “Undercover: Live from New York,” which features covers of Jimi Hendrix and Nancy Sinatra. She’s coming to terms with her body every day. “The other day I was thinking, ‘OK, so we’re a size 12-14 again. How do we feel about that?'” she told YahooShine. “Well, at least I’m not bingeing. I go out for really fun dinners and drink a lot of wine with my friends. But I’m not having these secretive sessions, hoarding Papa John’s in my room. My body does want to go to the gym, and I haven’t been taking it. I’m like, ‘We’re going.’ But I can say that today, it’s happy — and I’m happy — right where it is.”