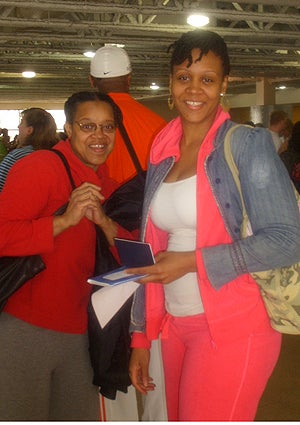 Most people look forward to life’s unknowns. I can’t. For me, tomorrows are filled with angst, anxiety and loss. There’s only one thing worse than losing the person you love most: witnessing little pieces of them disintegrate day by day. That’s my reality. Each dawn I rise to watch Alzheimer’s disease slowly and systematically attack my mother, and I am defenseless. The war didn’t start overnight. About four years ago I noticed my usually quirky but calculated mother started having lots of little slip-ups. She’d repeat the same story. She’d get confused doing her normal daily routine. She’d forget small details. Something didn’t seem right to me, but my sister and I simply concluded our mom was exhausted after years of working the night shift. Then a few weeks later my friend’s mother suddenly passed away from a brain tumor. Since she had similar signs — forgetfulness, confusion, etc. — I decided to take my mom to a neurologist. The doctor examined my mother and then administered a few tests. I vividly recall the moment I knew something was wrong. My mom was told two sets of facts then asked to relay the first one of the set. She couldn’t. By the end of the visit she was diagnosed with Alzheimer’s (a progressive brain disease which causes severe memory loss and diminishes one’s ability to function in normal activities), and was told she showed the early signs of dementia. She was only 55. I was numb. My mother was a single parent, so it was only her, my sister and me. As the oldest, I felt responsible for her. Most importantly, I was clueless as to what to do next. The doctors gave us a basic timeline, which was grim. They said she probably wouldn’t be able to work within a year or two, she’d need constant supervision and she would likely live for many more years in a deteriorating state. Oh yeah, and they did give us some medication. That’s it. The rest was on my sister and me. After the diagnosis I immediately started doing my own research and I discovered that exercise (which brings more oxygen to the brain and erodes plaque), vitamins (such as folic acids) and specific foods (spinach and salmon), all help slow progression of the disease. It’s been three years since my mom’s diagnosis and the most distressing part is life with her has no pattern. Some mornings she wakes up and she’s fine, on others she’s out of it, which makes it emotionally and physically stressful for the whole family. It’s weird to see my relatively young mother “acting older” due to the disease. In addition, she still “looks” healthy, so it’s hard to accept that she’s ill. We try to make the most of our plight. Last summer I took my mom on a cruise, something she’s always wanted to do. Sadly, I know one day I will be the only one holding those memories. Today, I’m working to balance honoring my mother and myself as we continue this journey. She confided in me that she never wants to go into an assisted living facility — plus changing environments accelerates the condition — which means that my sister and I will be responsible for her care 24/7 as the symptoms progress. My fears abound. She still goes to work and runs errands — a blessing — but I am always nervous that something will happen. Then there’s the looming question… will I get dementia? Despite all of the unknowns, there is one constant: I love my mom and I have to make things work. The hows, whys and whens are in God’s hands.