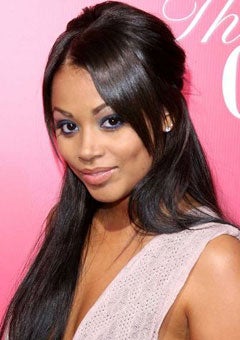 In a recent interview with Skin Deep author Kathleen Cross, “Single Ladies” star Lauren London broke her silence about her ex, rapper Lil Wayne, and spoke on the record about their romantic past. Lauren has caught a lot of flack since giving birth to the pair’s son, and the actress is tired or being labeled “desperate” by the media and bloggers.

When asked what the biggest misconception about her was, she replied, “That my son is the result of some kind of one night stand or groupie encounter with his father. I struggle with deciding when to answer or ignore the constant speculation about my private life, because I feel like that doesn’t belong to anybody but me.”

Lauren went on to tell the story about how she and Weezy met and fell in love when she was just 15, and their romantic roots run deeper than most would imagine.

“We were in a relationship that didn’t make it. We tried more than once to revive it, and we were engaged briefly years ago, but we eventually parted ways,” she confesses.

Maybe this will finally end all the chatter about Lauren being just one of the many “baby’s mamas” in the rapper’s life. She’s remained virtually mum on the topic since her son’s birth, but clearly she’s had enough.

Talking about the other women who have children with Lil Wayne wasn’t off limits in the interview. Shocker: She actually gets along with the other ladies.

“We are all good-hearted women who love our children and we want them to know each other. Real friendships have grown from that foundation, and the result has been more love, less drama, and less trauma for our kids,” Lauren admits.

It’s nice to see everyone’s playing so nicely together. Kudos to Lauren for setting the record straight.