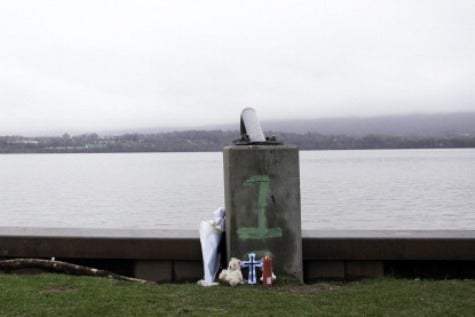 The small city of Newburgh, New York is coming to terms with an unspeakable tragedy: a young mother drove her four children into the Hudson River in a shocking murder-suicide this Tuesday night. Lashanda Armstrong’s 10-year-old son La’Shaun was the only survivor; the boy was able to roll down the minivan’s power window and swim to safety. According to the New York Times, he told investigators that his mother had grabbed him, along with his siblings (aged 5, 2 and 11 months) as the vehicle began to sink and said “If I’m going to die, you’re going to die with me.” He also said that his mother shortly thereafter had a change of heart and attempted to reverse the car. By then, it was too late.

Meave Ryan, who discovered the wet boy on the side of the road flailing his arms for help, told the Times that La’Shaun explained to her that his mother had been arguing with his stepfather over his alleged infidelity. Ms. Armstrong called an older relative prior to the fateful ride and said “I’m sorry, I’m going to do something crazy, you have to forgive me.” The relative called 911, but police arrived at the apartment too late to stop her.

Neighbors reported seeing Ms. Armstrong and the children getting in the minivan after a blowout with Jean Pierre, the father of the three youngest children. The 26-year-old helped with the family’s finances, but he did not live in the household.  Sharon Ramirez, a neighbor and “friend” of Ms. Armstrong told the New York Times that the couple had “a rocky relationship.” She should know: she had a three-month affair with Pierre last year, while Ms. Armstrong was pregnant.

Darice Anderson spoke with the Today show this morning, stating that her sister’s behavior had become strange over the past few weeks.  The 25-year-old mother had complained that pages of her diary were turning up missing and that the lights had been flickering on and off in her home. She also told her sister that she felt like she was being watched. According to the New York Post, Angela Edge Gilliam, the woman’s aunt, made the call to police just prior to the drowning. She says that there had been a “tussle” between Anderson and Pierre and that the couple had a history of domestic problems.

It’s devastating to think that this young woman was so distraught — and perhaps afraid — over her issues with her child’s father that she felt she had no choice but to end not only her life, but the lives of her four children. We may never know if Ms. Armstrong suffered from mental problems or if there was some level of abuse taking place of a magnitude her family may not have been able to access. However, it does seem that her aunt and neighbors were aware of the fact that the couple had “domestic problems.”

Let this be yet another tragic reminder of the importance of doing something when you become aware of a potentially violent relationship; whether it’s a neighbor, a friend or a relative, you may be able to save a life. If you hear a situation that requires immediate police attention, don’t hesitate to call 911. If you suspect that something is going on with someone’s relationship, but cannot confirm, talk to him or her.

Call the National Domestic Abuse Hotline (800-799-SAFE; www.thehotline.org), who can put you in touch with local support agencies and can provide you with action steps to help intervene without placing the suspected victim in increased danger. Whatever you do, don’t sit around and wait…as we saw in Newburg this week, you don’t know how much time you have before something devastating happens.