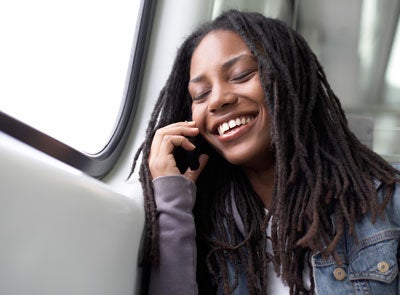 Cell phones are convenient. Cell phones are helpful. Cell phones are full of functionality. But posited in the wrong hands, cell phones can be weapons of the utterly obnoxious. I could probably brainstorm two dozen instances when cell phone users have irked my nerves just this week. So I can only imagine what it was like to be a passenger riding in the same Amtrak train car as Lakeysha Beard.

Name doesn’t ring a bell? It should. (And not just because as soon as you saw it, you knew she was one of us.) This gal talked on her cell phone the entire route of a roughly 600-mile trip from Oakland, CA to Salem, OR. That’s a 16-hour ride, y’all. Sixteen long, drawn-out, nowhere-else-to-go hours of her yakking about Lord knows what to heavens only knows who.

And can we be honest: as Black women raised by Black women who are regularly surrounded by Black women, don’t you feel pretty confident in assuming that homegirl wasn’t talking at a whisper, even though she was in the clearly marked, specially designated quiet car?

According to reports, after one brave but fed-up patron finally asked her to hush, Madame Telephone had the nerve to get belligerent. I mean, we saw that coming as part of the story because someone who has the audacity to break the rules and talk — for 16 hours at that — on the quiet car is probably not going to take kindly to anybody suggesting that she zip it. After the police were called and she was wrangled off the train, my girl confessed that she felt “disrespected.”

First of all, she needed to get kicked off the train. Secondly, who in the world was she talking to for more than half a doggone day? Seriously, Idris Elba the Man of My Dreams could call me right now and I’d probably run out of things to say at the one hour mark.

Besides, anyone who’s ever ridden in the quiet car knows that those Amtrak passengers take that thing real serious. I got the side eye one time during a coughing fit and had to get myself straight quick before a confrontation went down. That was from DC to Baltimore. So they must make riders a lot more patient over there on the West Coast to allow Ms. Beard to get her chit chat on for 50 times longer than it took for me to get the tickle in my throat under control.

I don’t think people even begin to realize how rude cell phones compel them to be these days. They’re so engrained in our everyday activity that it’s second nature to be texting while the cashier is ringing our purchases at the Piggly Wiggly or wrapping up a conversation with Big Mama at the McDonald’s drive thru. But that is r-u-d-e. Ain’t no cuttin’ it two or three different ways. Add two more wags of my finger if your ringer blared, two more if you were at work or your child’s recital, and two more if your ringtone included a cuss word. In a world where good manners have taken a back seat to personal convenience, cell phone impropriety still tops my list of irks.

But quiet as it should’ve been kept: I need to know who Lakeysha’s service provider is. Because if homegirl could talk up one whole side of the country without a dropped call and an overage of minutes, I need to lose Verizon and get on her plan. That’s real talk.