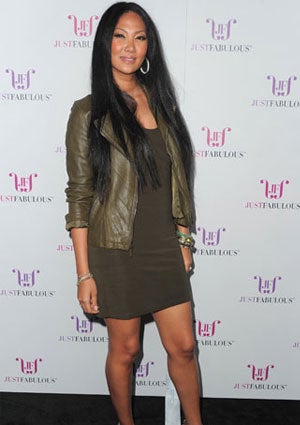 The queen of fabulosity isn’t too thrilled with recent news reports claiming she’s guilty of unhealthy diet practices. Simmons is fighting back — calling those reports “ridiculous.”

The former supermodel gave birth to her youngest child, Kenzo, in 2009 and has been heavily scrutinized over her weight since then. Pop Eater reported that Simmons lost 25 pounds by eating smoothies and protein bars. “First I was attacked for being a size 10, now I’m anorexic,” she writes on her KLS blog.

“[Those reports] led people to believe that I shed 25 lbs by not eating, which is completely ridiculous. I am a mother of three young children, two of whom are girls and I’m trying to raise them with a healthy body image. It’s taken me almost a year to lose close to 25 lbs and I did it through healthy diet and exercise,” she says.

Though Simmons shed a few pounds she maintains that she’s “still curvy and 100% healthy and proud of my body and the time it has taken me to undergo this personal journey for myself.”

Simmons is the latest star to battle her weight in the public eye. What’s America’s fascination with youth and beauty? It’s borderline “ridiculous” as Simmons says and almost shameful that we’re body watching celebrities. Don’t you agree?