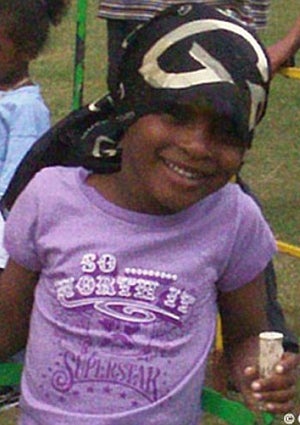 The tragic tale of British child Khyra Ishaq as reported by Parlour Magazine. The girl in this picture is Khyra Ishaq. The seven-year-old weighed just 37 pounds when paramedics found her at her home in Birmingham in May 2008. She was severely malnourished. She’d been deliberately starved by her mom and stepfather, and was pronounced dead when she arrived at the hospital . This week her mother, Angela Gordon, was jailed for 15 years. Her stepfather, Junaid Abuhamza, was jailed indefinitely. The more details you hear about the final months of Khyra’s life, the more your heart is pained. In this day and age, for parents to starve their child to death, and no one does anything, is truly disgusting. During the trial, jurors heard that Khyra had been killed by an infection, caused by months of deliberate starvation. The house was full of food, but it was kept locked away, out of the reach of Kyra and the five other children in the care of Angela and Junaid. Khyra was often forced to stand outside in the cold, or in front of a fan for long periods, she had cold water poured over her, and was beaten with a cane. At mealtimes, she and the other children were given a bowl of carrots, beans, eggs and rice to share. One bowl. Six kids. At one point, a neighbor spotted Khyra trying to eat the bread out of the bird-feeder in her garden. So who is to blame then? Social services has to take responsibility, of course. When the school spotted Khyra stealing food from other kids, and she became detached–the school contacted social services. But Angela and Junaid were clever. Once they’d dealt with that situation, they pulled her out of school on the pretense of “home-schooling” her. The neighbors, who noticed that Khyra was becoming almost skeletal-like with her ribs sticking out, didn’t say anything. The neighbor who spotted Khyra eating the bread in the garden didn’t say anything. Do you know when the neighbors opened their mouths? When the media came a’knocking after Angela and Junaid were arrested. So they couldn’t be bothered to pick up a phone and tell someone that this child was obviously starved and malnourished? Khyra’s father had, in my opinion, the audacity to pipe up after the trial. He was “raging” apparently, he said that child protection officers should have done more to save his daughter, he said the system was “flawed,” and says he has no confidence in social services. So, you didn’t fail as a father then? These people were starving your child for five months, so much so that she collapsed and died–and you don’t think that you have a parental responsibility to protect your child? How he can sit there and place the blame solely on social service is beyond me. When was the last time he visited his daughter? If he’d bothered to go and visit her–just once–she may be alive today. Don’t get me wrong, I’m not ignoring the disgusting actions of Angela and Junaid. They were wrong, out of order and deserve all they get. But they are by no means the only people at fault in this story. As a society, we are slowly but surely turning a blind eye to the bad things that happen around us.  Pretending something’s not happening does not make it go away. If I saw my neighbor’s child looking skeletal and scavenging for food, I’d say something. That ‘ish could not sit on my conscience. In so many of these child protection cases, people seem to be afraid to blame an “absent” father. The same father who couldn’t be bothered to visit his child in five months, is all of a sudden able to make his appointments to speak to the media. Well, I’m not afraid to say it. Ishaq Abu Zaire, you failed your child. Read more: