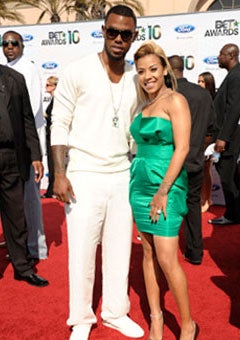 Twitter and I just don’t get along. I’ll Facebook ’til carpal tunnel locks my fingers up, but I just don’t enjoy the fast-paced world of tweets and twitpics. I was glad I stopped by yesterday, though, because I stumbled on news that Keyshia Cole married her NBA baller boo over the weekend.

My first thought was go ‘head, y’all! Because even though I’m smack dab in my eternal singledom, I’m genuinely happy for any couple who finds each other, from celebrity mash-ups to Pookie and Clandetta down the block.

Even with all the bells and whistles of the new millennium, there’s nothing like a good ol’ fashioned love story.

My second reaction was a bit more reflective, maybe even inspired: I wonder if Keyshia and her bestie Monica, who herself got married back at the beginning of the year, will inspire their fans, fellow baby mamas and women generally settling for less than they deserve to stand in front of somebody’s altar and say ‘I do,’ too?

It would’ve been nothing for Keyshia and her brand new hubby — Cleveland Cavs player Daniel Gibson, in case you didn’t know — to take the new-age route and shack up instead of making it official. Seems like everybody and their sister’s cousin is either living together or creeping up on common law these days. It’s the modern way of getting to happily ever after. And it sure makes that milk and cow adage seem archaic.

But sometimes — heck, a lot of times — there’s something to be said for doing stuff the old-fashioned way. My grandparents enjoyed 46 years of holy matrimony before my granddaddy passed on. My aunt and uncle will celebrate their 25th anniversary at the beginning of June. My pastor and his co-pastor-slash-wife, they’ve been happily hitched and totally smitten for the better part of two decades. And you know what these fabulous couples have in common (besides being my relationship role models)? They didn’t live together before they got married.

I’m well aware that some folks have, for whatever reason, a mutual aversion to the institution of marriage. Those people can shack up to their hearts’ content because that’s not part of either one of their game plans. I don’t particularly understand it myself, but hey, I don’t rock the boat or knock the sailors.

But I feel like this right here: if your desire is to go from Miss to Mrs. and you have a man who’s willing to give you pet names, cuddle at night, meet your parents, number crunch bills, delegate household duties, sex you up one side of ecstasy and into the next, he can drop down to his knee and ask you to be his wife. I just believe we women shortchange ourselves by becoming glorified roommates when we’re worth so much more than being a live-in convenience.   Besides, I just don’t think we need the dry run of living together to know if a dude is husband material. That’s what the whole dating process is supposed to do. If you’re that uncertain that you need to put him on a trial basis, chances are those doubts won’t work themselves out by sharing an address in a condo complex.

This much I’ve learned from watching on the sidelines: there’s more at risk financially, emotionally, and mentally when you shack up than there is from settling down. There’s no increased chance of making a relationship the next Great African-American Love Story because you shacked up before you took the dive. In fact, studies show that couples stand more of a chance of being doomed by cohabitation than benefited by it.

My sincere congrats go out to Keyshia and Daniel. I’m not sure if they lived together or not before they got married. Maybe, maybe not. If they did, though, they turned it around. And I can only hope, since celebrities wield such heavy influence over what so many folks do, say and believe, that her decision to move from baby mama to wife inspires other ladies to demand more from their romantic relationships, just like her.