Kevin Hart may be a comedian, but the struggling school district in his hometown, Philadelphia, is no laughing matter to him. On Wednesday Hart took to Instagram for a “Public Service Announcement,”:

“I am taking 250,000 & donating it to the school district & parks & recreation centers to help them buy new computers! My city made me who I am today and for that I am thankful. I will make it my priority to help my city get out of this debt.“

In a statement, the Mayor of Philadelphia, Michael Nutter expressed his gratitude: “I want to thank Kevin Hart for his incredibly generous gift to our schools, recreation centers and citizens of all ages,” he said. “These computers will have a very meaningful impact on Philadelphia.”

Hart Instagrammed a photo having a ball with kids at school which he mentioned will benefit from the computers. 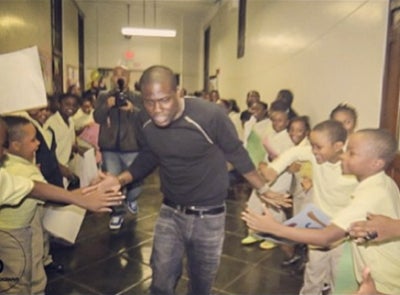 The struggling school district closed 24 schools and laid off thousands this summer. Also, in September a recent school death of a 12-year-old suggests having a full-time nurse on staff could have prevented this.