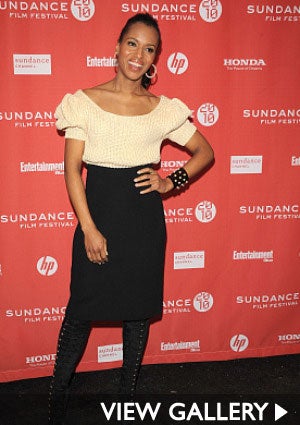 These days you don’t expect to see actress Kerry Washington in a romantic comedy. On top of putting in tons of legwork to elect President Barack Obama during the 2008 election, the Bronx-bred stunner has lately shown a penchant for meatier, socially-conscious roles, which has earned her political chops on and off screen. Last week Kerry was at the Sundance Film Festival to debut the indie drama “Night Catches Us,” in which she plays an ex-Black Panther opposite actor Anthony Mackie. She’s also currently starring in her first Broadway production, aptly titled “Race” in which she plays a lawyer who has to defend a White client accused of assaulting a Black woman. Kerry spoke with ESSENCE.com about her Broadway debut, choosing roles that challenge her and the difference between a theater and movie audience. ESSENCE.com: You haven’t done a play in a long time. KERRY WASHINGTON: I haven’t done a run of a play since college but I’ve still done a reading here and there. Theater’s always been a part of my life but I just hadn’t really made a commitment to a full run of play until now. ESSENCE.com: So what made you make this commitment? WASHINGTON: I was really missing the gratification of doing theater and felt like it was time. I felt like this was an interesting kind of challenge. I gravitate towards film projects that scare me a little because I feel like that’s how I grow. And this play definitely shakes things up. ESSENCE.com: What’s the gratification of being on stage as opposed to being in a movie? WASHINGTON: It’s a different medium and there’s a different relationship with the audience. In a movie you don’t get to be a in a room with your audience. In theater you have this other character, which is the audience, and they give you feedback about how it’s supposed to go. So there’s an excitement to doing theater that you don’t have in film and television. And also the ability to return to it everyday. Sometimes when you’re doing a movie, you do the scene and you go home and while you’re brushing your teeth you go, “Oh my God, that’s what that line means” and by then it’s too late. ESSENCE.com: Did you prep for this role differently from the way you would a movie? WASHINGTON: The playwright, David Mamet, has his own theories about acting and ideas about how to approach it and so I tried to come to the project really honoring his views. Often times I do a lot more preparation before rehearsals start, and I did in terms of the lines, but in the spirit of Mamet I tried to allow the character to unfold during the rehearsal process. ESSENCE.com Growing up in the Bronx and loving theater you must have dreamt of being on Broadway. Now that you’re there, what have you learned? WASHINGTON: I have incredible co-stars. David Alan Grier and James Spader are just so smart, which is important because the material is really difficult. So I’m lucky to be working with such immensely talented actors. And also, it’s humbling to be in theater because you don’t get to say, “Okay, print that we’re done” and get to move on to the next scene. In theater the play is not done with you. Today might be good but tomorrow’s performance might be a different story. ESSENCE.com: Do you read the reviews? WASHINGTON: I tend not to. I think it’s really tricky because the thing with reviews is that if you believe the good ones then you have to believe the bad ones so I think it’s good to stay away from them in general.  ESSENCE.com: So tell us about that racy Maxwell video. How did that come about? WASHINGTON: They called me and asked if I would do it and they sent me the idea. It was fun. Maxwell is such an incredible artist and I’ve been a fan for so long so it was really fun to have the opportunity to collaborate with him. I loved the song the first time I heard, I thought it was really sexy. ESSENCE.com: You do eight shows a week, sometimes twice a day. How do you think you’ll reward yourself after such a grueling schedule? WASHINGTON: Last time I was in Mexico I went to the Tides Resort Riviera Maya. I just fell in love with that property and the service and it was just so beautiful. It’s the perfect respite for going into hardcore in-the-trenches work mode. Kerry Washington stars in “Race,” currently playing at the Barrymore Theater in New York City. For more information, visit broadwaybestshows.com Read More: