By Yesha Callahan · Updated October 23, 2020
Update: January 10, 2019 1:44 p.m. PST: Toure´has issued a response through his rep: “On the show, our team, including myself, engaged in edgy, crass banter, that at the time I did not think was offensive for our tight-knit group. I am sorry for my language and for making her feel uncomfortable in any way. As a lead on the show, I should have refrained from this behavior. I have learned and grown from this experience.”   Earlier: Since the premiere of dream hampton’s Lifetime documentary Surviving R. Kelly, many celebrities have come out to denounce the R&B singer. The documentary was a long-awaited vehicle for young women who’ve allegedly been abused by Kelly to tell their stories. And it also included commentary from those who’ve covered the allegations against the singer over the last decade. One of the commentators included in the documentary was journalist Touré Neblett, who most commonly goes by his first name. Touré, a music journalist, is quite familiar with the allegations Kelly has faced throughout his career. In 2008, Touré interviewed R. Kelly for BET, and as seen in the documentary, he didn’t get the answers he was looking for when it came to the musician’s “like” of teenage, particularly underage, girls Earlier this week,  Touré appeared on The Clubhouse with Mouse Jones podcast to once again discuss Kelly. 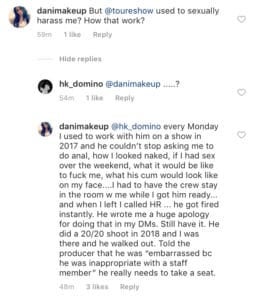 In the post, a make-up artist, who goes by the name ‘Dani,’ alleged that Touré sexually harassed her while she worked with him on a show, saying, “He couldn’t stop asking me to do anal, how I  looked naked, if I had sex over the weekend, what it would be like to f–k me.” In an exclusive interview with ESSENCE, Dani shared additional details about her experience with Touré. “I worked with him most of 2017, I left in October, before he left,” she claims. After Dani quit, she says she reported Toure´ to human resources. He left Time Inc. after that; according to his rep because his agreement was over. Dani claimed to have been sent an apology via Instagram from Touré, which she shared with ESSENCE. As to what made Dani report Touré to his employer after she quit? She said it was because he was doing media appearances talking about Harvey Weinstein and his allegations of sexual misconduct. “He went on Hot97 to talk about Harvey Weinstein (after he apologized). I accepted his apology and was ok to move on but, you can’t be a sexual predator and go around shaming other predators,” she said. Dani said she shared her story on Instagram because she saw Touré on Surviving R. Kelly and the media appearances he was making. “When I saw him going around as R. Kelly’s docuseries spokesman to different radio stations, the lies had to stop. I’ve worked with Mouse Jones before and wanted him to know the truth,” she said. Below are screenshots of the apology allegedly made by Touré in November 2017: 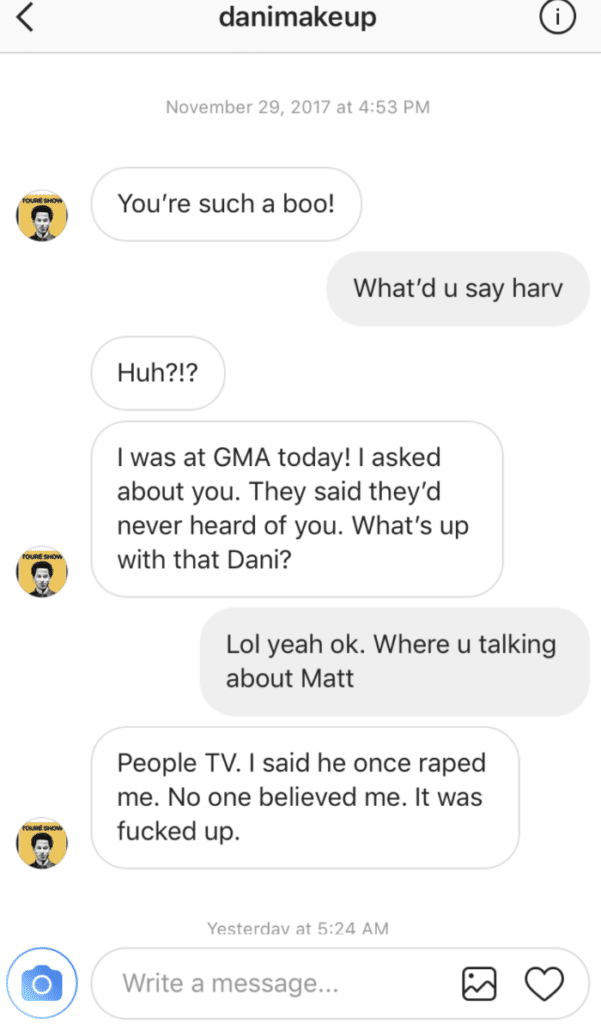 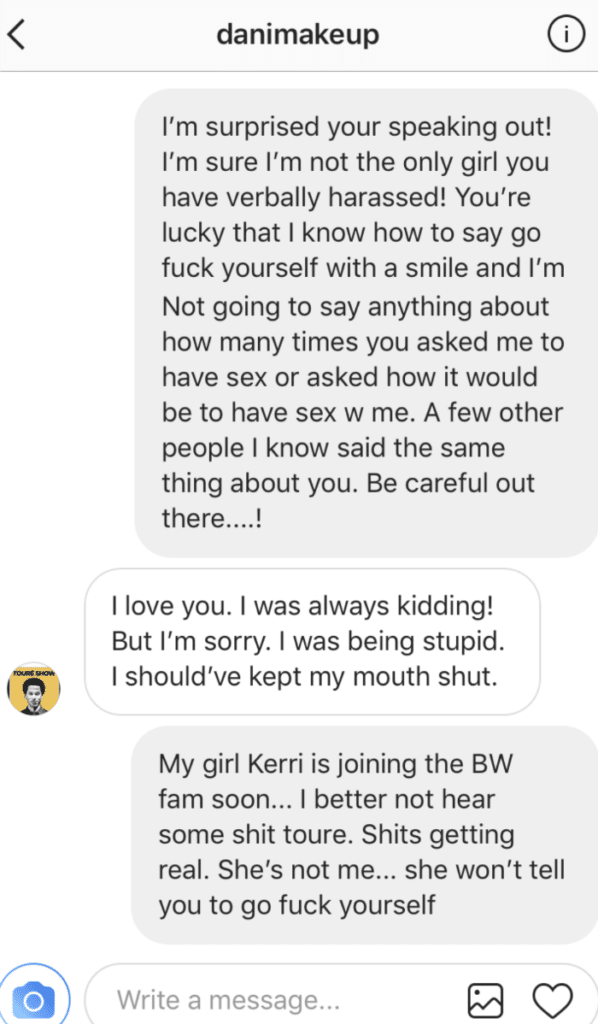 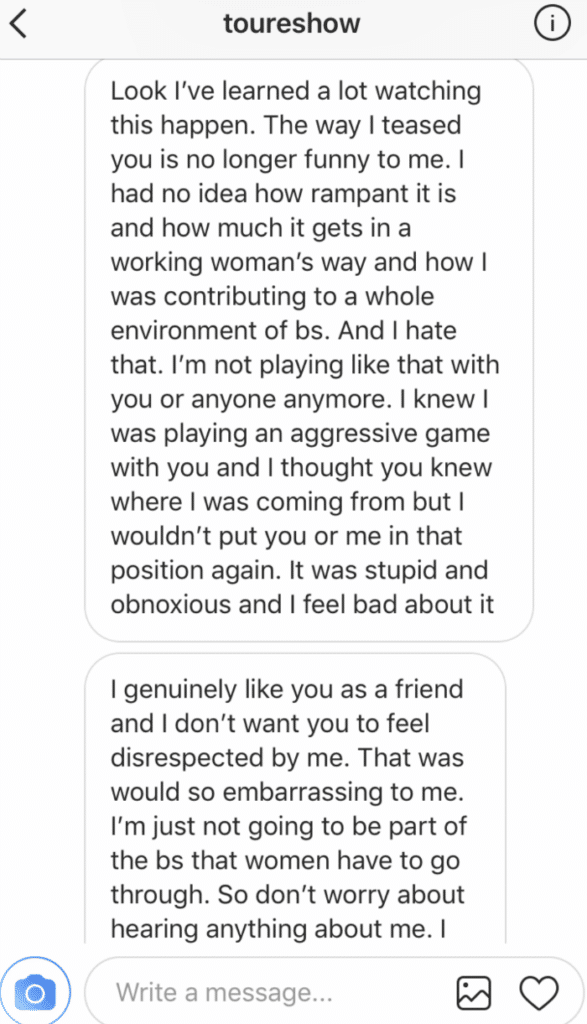 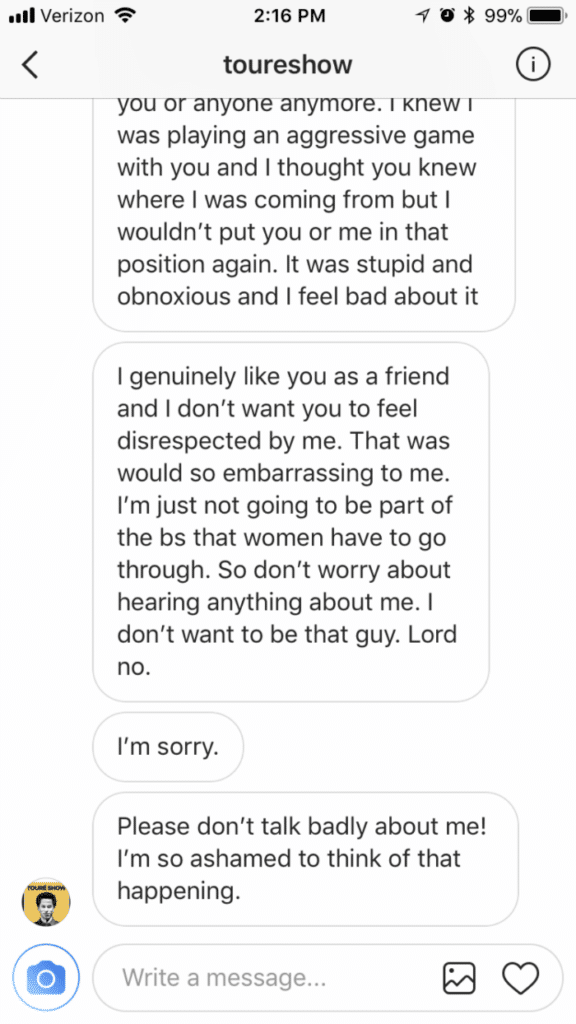 When it comes to living in the #MeToo era, stories have been surfacing about various men and their toxic behavior in and out of the workplace. From Harvey Weinstein, Bill Cosby, Louis C.K., and the countless other men in entertainment, sexual harassment is a much talked about topic more than any point in our history. But in the Black community, there still seems to be a cloud of disbelief when a victim comes forward, as we saw during some of the commentary surrounding Surviving R. Kelly. It takes courage for women and men to admit that they’ve either been sexually assaulted or harassed, and it’s not something that should easily be brushed under the rug. Perpetrators of toxic and abusive behavior should be held accountable for their actions, and understand how their actions have impacted others. Apologies are a start, but what is also needed is a dedicated focus on behavior change and healing to ensure there is no part of our society where this is ever accepted as normal. ESSENCE has reached out to Time Inc., which issued a statement saying they do not discuss personnel matters, but stated Touré is no longer employed at the company. See the comment from Touré via his rep above.
TOPICS:  toure toure neblett toure sexual harassment