By Breanna Edwards · Updated October 23, 2020
Last Friday, the Senate Judiciary Committee met hours after the hearings of Supreme Court nominee Brett Kavanaugh and his accuser, Christine Blasey Ford, to determine the trajectory of Kavanaugh’s confirmation. The committee would vote on whether to recommend that the full Senate approve Kavanaugh’s nomination, reject Kavanaugh’s nomination or the committee could offer no recommendation at all. On the 21-person committee, Sen. Jeff Flake (R-Ariz.) was seen as the lone swing vote in the line up of 11 Republicans and 10 Democrats. And early Friday morning, many were still waiting with bated breath to see how he would vote. And then the news broke. Flake confirmed that he intended to vote for Kavanaugh. But it’s what happened before Flake’s vote that had people talking. Flake had a fiery confrontation on his way to go vote on the issue, after being confronted by two sexual assault survivors. CNN journalist Suzanne Malveaux was there to witness it all. 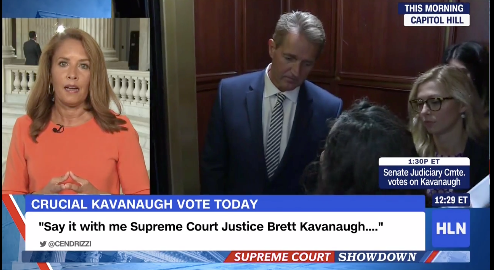 Malveaux recounted for CNN how she met the two women who ultimately would become the faces of resistance in front of Flake’s office: Ana Maria Archila, a New York City activist who had been attacked when she was five years old, and Maria Gallagher, a recent college grad, who also had her own survival story. As Flake attempted to get on the elevator, Archila stepped in the way, preventing the elevator from closing and blocking Flake’s exit. Malveaux wrote: Flake was stuck. Having to explain his position. In this small, hot, enclosed space which quickly filled with raw unbridled, unscripted emotion. “You have children in your family. Think about them. I have two children. I cannot imagine that for the next 50 years they will have to have someone in the Supreme Court who has been accused of violating a young girl,” Archila shouted. “What are you doing, sir? And then Gallagher. “I was sexually assaulted and nobody believed me. I didn’t tell anyone, and you’re telling all women that they don’t matter, that they should just stay quiet because if they tell you what happened to them you are going to ignore them,'” she shouted. “That’s what happened to me, and that’s what you are telling all women in America, that they don’t matter. The two took turns confronting Flake, as the elevator buzzed, and his aides tried to push any button that would close the doors. It was a raw and painful moment to watch, as Gallagher insisted that Flake look her in the eye and tell her “That it doesn’t matter what happened to me, and you will let people like that go into the highest court of the land.” Flake was seen on the elevator with his head lowered, avoiding the women’s gazes. “It was surprising. It was shocking to us because it was totally not anticipated. We were asking the Senator a question when he was in the elevator and one of the women was able to put her foot down, allowing this opportunity for her and the other sexual assault survivor to confront him directly,” Malveaux told ESSENCE, in an exclusive interview. For Malveaux, experience and instinct took over as she realized that any question she had was not as necessary in the moment as the emotion, passion and frustration that these two survivors were showing to the Senator. “These were two women were directly demanding that they be seen, that they be heard, that their stories be seen and heard. This was a moment that was so much more impactful than anything I could ask or say during that time and what we were seeing unfold before our eyes at that moment was so rare and important that it became pretty obvious my role as a journalist was really to listen and to allow this moment and the story to unfold,” she added. “It was much more important that they were getting those answers and he was accountable to them because that is what they were asking. That’s what they were demanding and that’s what they were expecting at that moment.” In the end, Flake did eventually make it to the committee to vote,  however throughout the proceedings leading up to the vote he looked uncomfortable and unhappy. He then slipped away from the room. Murmurs started circulating that he was meeting with Democrats ahead of the vote. Ultimately he still voted to move Kavanaugh’s nomination to the full Senate but insisted that a limited FBI investigation be held into the sexual assault allegations against Kavanaugh. “I think it would be proper to delay the floor vote for up to but not more than one week in order to let the FBI continue to do an investigation limited in time and scope to the current allegations that are there and limited in time to no more than one week,” he said at the time. And the sudden change was something that stood out to Malveaux, the change that these women were able to bring, even if it was just for that moment, through their bravery. “I just want to speak to the power of these two women,” Malveaux said. “I think it’s so rare that you have in real time that type of confrontation play out and [have] so quickly a response and a change in the course of the way the process went and possibly in a historic way.” “These two women made a huge difference whether or not Kavanaugh’s confirmed…[they] made a huge difference in captivating the attention of the country in that very raw and unscripted, unbridled moment because so many people heard them and saw them and are now talking about this and that’s such a rare experience. And I think even they were shocked afterwards at how quickly everything had changed and that the change had come clearly as a result of their courage to confront him during that very small period of time.”
TOPICS:  #MeToo Ana Maria Archila Brett Kavanaugh CNN Jeff Flake Maria Gallagher sexual assault Suzanne Malveaux