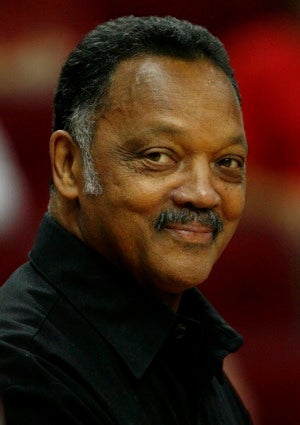 Reverend Jesse Jackson isn’t taking Cleveland Cavalier’s owner Dan Gilbert’s comments about LeBron James lightly. Gilbert recently made headlines for writing a scathing open letter to James after the star basketball player signed with the Miami Heat last week. In his letter Gilbert called James “disloyal” and added that Cleveland fans didn’t “deserve this kind of cowardly behavior.” Jackson says Gilbert spoke like “an owner of LeBron and not the owner of the Cleveland Cavaliers.” “He sees LeBron as a runaway slave,” the reverend told the Associated Press. “LeBron is not a child, nor is he bound to play on Gilbert’s plantation and be demeaned. He has been a model citizen and has inspired the children of Akron. Cleveland, the state of Ohio and the United States.” Jackson’s comments made him a trending topic on Twitter last night. Sports commentator Stephen A. Smith chimed in, tweeting: “I do not think it was right for Jesse Jackson to bring up race. However, I do believe his sentiments are shared by a lot of folks in the African-American community.”