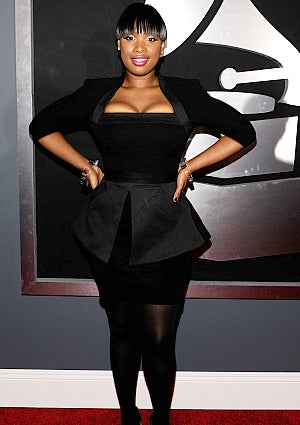 Jennifer Hudson is not only breaking barriers as Weight Watcher’s new spokesperson, she’s also dived headlong into recording her sophomore album. “I am in the recording process, at least 10 songs in,” the 28-year-old singer-actress recently told the AP. “It’s between film and music right now, working on the album, but it won’t be out until September.” The as-yet-untitled album is the follow-up to her 2008 self-titled debut and Hudson says she’s aiming to make a project that both represents her and pleases her fans. “I think it will definitely be a different direction and I’m so excited about that,” Hudson continued. “I want this album to feel good. Just hearing the feedback from the music being heard…the reaction to it, I love it. So I’m like, wow, I want this album to be good, but I definitely want it to be very much me, and I just hope the fans embrace it.” Hudson is also prepping for her role in the biopic about South African activist Winnie Madikizela-Mandela, the ex-wife of Nelson Mandela, which begins shooting in Africa in May. “It’s such an amazing honor,” Hudson said of her upcoming film role. “I’m so excited about it. Right now it’s very fresh; just the preparation for it, it’s getting pretty close, less than a month away or so, and then I’ll head in to Africa and just be in that environment and hop into the character. Read more: