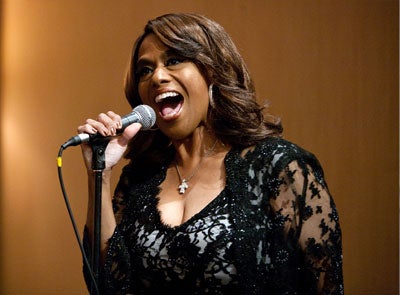 Two-time Grammy winner Jennifer Holliday will forever be a star etched on the walk of fame of our minds for her tour de force performance of the ode to heartbreak, “You’re Gonna Love Me (And I Am Telling You),” from the acclaimed 1982 Broadway musical “Dream Girls.”

Now, twenty years and a whole lot of drama later, at 50 she’s a sleek 220 pounds thinner than Effie White (the character she portrayed in “Dream Girls”) and wants you to know she’s “more than just a song.” She is an independent artist and I am telling you, with the release of “Goodness and Mercy,” you’re gonna love her still.

She recently chatted with ESSENCE.com about the creative inspiration for the album and some of the hurdles she leaped over during her career hiatus.

ESSENCE.com: Tell us about your new gospel project.
JENNIFER HOLLIDAY: This particular project is a unique project. It’s actually sermon in song. What I’ve done is taken spoken word to a new level. Some of the songs I have written, but I’m using sermonettes from my pastor at Ebenezer Church [in Atlanta], Rev. Raphael Warnock to inspire hope. I did have a gospel album prior to this in 1994 called “On And On.”I hadn’t done any other attempts at gospel or sacred music since then. So I was compelled to do so because mainly at the time I started working on it, the country was going through a recession. A lot of people were confused. A lot of people were losing their homes and jobs. I wanted to give people a lot more to hold on to… so they would know they could make it, so the word of God could anchor them even at their darkest hour.

ESSENCE.com: Did your temporary blindness result from multiple sclerosis? (Holliday was diagnosed 15 years ago.)
HOLLIDAY: Yes, it attacked the optic nerve in my eye. The last time it happened was one of the hardest things ever for me. I was in the hospital with no sight in my right eye waiting to be seen, and it was during the time that Jennifer Hudson was at the Golden Globes…That was one of the scariest things in the sense that you’re looking at something you’ve done and created and you’re lying in a hospital going this may be it for you.

ESSENCE.com: What took you to the brink of suicide 20 years ago?
HOLLIDAY: The music industry is a very rough industry. Many years ago I think it was even rougher in the sense that a lot of it was predicated on image. Really my career was going downhill because we had entered into the era of disco and video. My record label had dropped me. They said even though I had a great voice I was overweight. They wanted me to sing up-tempo songs and big voices weren’t really in. After I was going out of the situation, then the small girls came in with big voices (Whitney Houston, Mariah Carey). So it was like, why can’t you look like them? There was nothing I could really do… I hadn’t amassed a fortune to where I could ride it out. I had catapulted my weight all the way up to 340, I’d filed for bankruptcy and lost everything and I just couldn’t see how I could make it.

ESSENCE.com: You performed a duet with Jennifer Hudson on the 2009 BET Awards. What was that like considering how you felt previously?
HOLLIDAY: Stephen Hill kept asking me to do it and I turned him down. I told him I’ not singing nothing with Jennifer Hudson. He asked for months. Then he came with another man and they asked what would it take and I said I just really don’t know if you all are going to portray it right or use the media to do things. They said what if you just showed up and we don’t tell anybody. So I thought about the bigger picture that if anybody should have that history it should be BET and that’s how I made the final decision.

ESSENCE.com: What is the biggest challenge you have overcome and how did you do it?
HOLLIDAY: The biggest thing I’ve had to overcome was clinical depression. Your mind is the most powerful weapon you have once you can get control of your mind… I had to stop hearing the negative voices where Jennifer was not worthy of love or living. I got that to stop by clearing my mind writing crossword puzzles — doing anything that I could to fill my mind so that the negative thoughts had no room. And not just for my career… I’ve shown up for my life and I’m gonna stay.