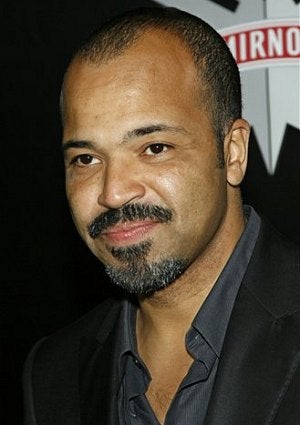 This season, the Great White Way gets a little more brotherly love as actor Jeffrey Wright and rapper Mos Def reunite on the stage for “A Free Man of Color,” a look at politics and race in 19-century New Orleans, by playwright John Guare. Fans are more likely to spot the uber private Wright — best known for his command turns in films like “Boycott” and “Basquiat” and theatrical masterpieces like “Angels in America” — biking through his Brooklyn neighborhood than riding in a limo, or hunkered down with his wife, actress Carmen Ejogo, and their two kids at their favorite neighborhood diner, than chopping it up with fellow actors at some Manhattan hotspot. Not that the notoriously private star doesn’t like to work — he’s appeared in more than 30 films and half a dozen plays since landing his first movie role in “Presumed Innocent” opposite Harrison Ford in 1990. It’s just that he’s not too keen on all the trappings of fame. “We have become a nation obsessed with celebrity,” explains the 44-year-old Washington, D.C.-born, New York-based actor, whose new play “Free Man” opened at New York’s famed Lincoln Center this week. “When I got into this business it was to be an actor, not a star.” In fact, the Tony, Emmy and Golden Globe-winning thespian is so serious about maintaining his “regular life” that acting, he says, has not been his primary focus for years. Instead, his professional focus has been on his Sierra Leone-based non-profit Taia Peace, which helps rural African communities develop their own natural resources. It took a part expressly written for him by director George C. Wolfe — his flamboyant, promiscuous, wig-wearing character in “Free Man” — to draw Wright’s attention back to this side of the pond. “This play is a celebration of New Orleans,” he says, “a celebration of that city and the life as it is lived there. It also pokes at the idea of the social mask that we as African-Americans wear as we navigate through the cultural landscape,” he adds. Next up for Wright is starring in “Source Code,” a new sci-fi thriller with Jake Gyllenhaal set for next year. The “Casino Royale” star hints he may also reclaim the role of Felix Leiter in the next James Bond flick: he’s already the first Black man and the second actor in the history of the Bond franchise to play the character more than once. “There’s always so much secrecy around these sorts of things before they’re announced,” he says playfully. “But if they ask me to come back I’ll be there. Jeffrey Wright and Mos Def star in “A Free Man of Color,” now playing at the Lincoln Center Theater in New York City.