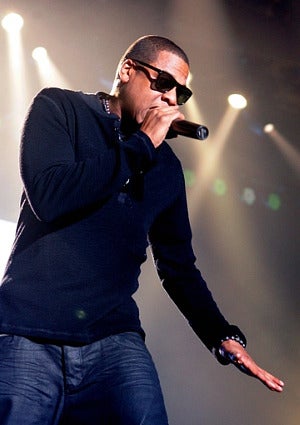 “I know everybody is gonna take this wrong,” Jay-Z said during the annual “2 Kings” dinner during NBA All Star weekend in Dallas. ‘We Are the World,’ I love it, and I understand the point and think it’s great. But I think ‘We Are the World’ is like ‘Thriller’ to me. I don’t ever wanna see it touched.” This after 80 celebs gathered to record “We Are the World 25 For Haiti” last month. As far as Jay is concerned, the original, recorded 25 years ago was a classic that should never be remade. “I appreciate the efforts and everything, but ‘We Are The World’ is [musically] untouchable like ‘Thriller’ is untouchable. Some things are just untouchable. It was a valiant effort, but for me, it’s gonna be untouchable.” So what’s hip hop’s highest earner’s recommendation? A new song. “I have tremendous respect for Quincy Jones,” he said, “I think he’s genius, as everyone else does. [But] I think it’s time for us to make a new [song].” Read More:
Loading the player...