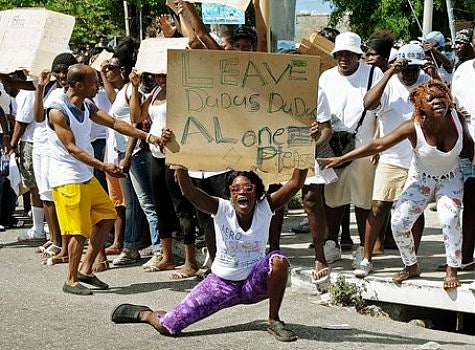 Supporters of alleged drug lord Christopher “Dudus” Coke took to the streets of Kingston, Jamaica to protest of the government’s decision to extradite him to the United States to face drug trafficking and gun charges. But Coke isn’t taking the extradition request sitting down. He has barricaded himself in Tivoli Gardens, a poor neighborhood in Kingston, where residents are protecting him. The government declared a state of emergency after armed supporters clashed with police over the weekend. “Dudus” is connected to the “Shower Posse” an infamous gang accused of murdering thousands and starting the cocaine wars of the 1980s. In Jamaica he is also known as “President” because of his ties to the ruling Jamaica Labor Party and influence over politics. Prime Minister, and JLP leader, Bruce Golding had initially refused to allow the U.S. Department of Justice’s extradition request but changed his mind amid growing criticism. The U.S. and Britain have issued travel advisories for anyone visiting the island because of the threat of violence.