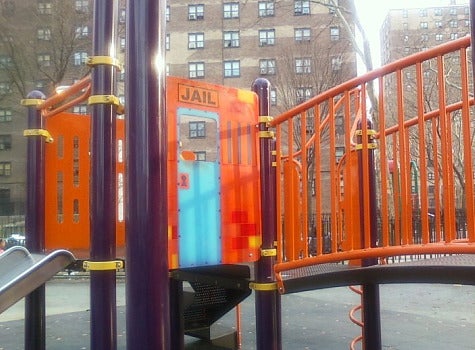 Here’s one playground drama that’s deserving of attention: community activists recently discovered a jungle gym with a cell door, prison bars and the word “jail” painted on it at the Tompkins Houses, a housing project in Brooklyn. The playground just so happens to be in Bedford-Stuyvesant, a historically Black neighborhood with the largest prison population in the state. Coincidence? We think not. Activists first called attention to the offensive playset via Facebook this past weekend. “Setting up a play jail in an area that is ground zero for the state’s prison pipeline doesn’t seem like a coincidence,” says Malcolm X Grassroots Movement’s Monifa Bandele, who photographed and posted an image of the jail on various social media sites. After a heated backlash from the blogosphere, the city’s housing agency responded by promptly painting over the sign and the bars. “Images are powerful things because they normalize certain issues,” adds Bandele. “So in my community you have children coming downstairs to play in this “jail” and then going upstate to visit family in prison. They begin to think it’s just a part of life.” Residents at the complex tell Bandele they have tried for years to remove the sign, even spray painting over it. But the housing authority would restore it each time. Some will say it’s just child’s play because, after all, kids have been playing cops and robbers for years. However, the climate we’re living in today offers a different reality for Black children living in neighborhoods with high incarceration rates. And now they go downstairs to play and are reminded that mommy, daddy, uncle or grandad is in prison. “It’s a painful experience they have to be reminded of,” says Bandele. French philosopher Roland Barthes once noted that the toys we allow children to play with inevitably condition them to think and assume certain roles. For instance, giving a little girl a doll to play with is a way of conditioning her for the gender roles she is expected to assume. The same for the toys we give to boys. So what exactly was the New York City Housing Authority saying to the children of the Tompkins Houses and the other “secret” location? And would it have been a stretch to paint a sign that read “School?” Read More: