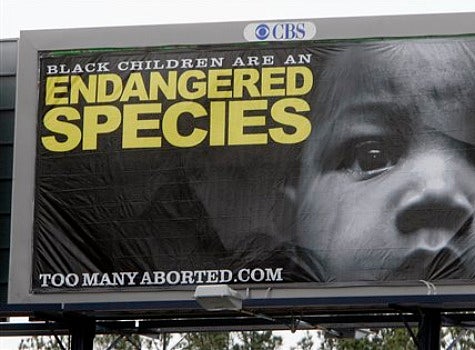 When anti-abortion group, Georgia Right To Life erected 80 billboards saying “Black Children are an Endangered Species” in and around Atlanta, they wanted national outrage. And they got it. The old saying goes, “They messed with the wrong people” but in this case, they’re messing with the right people. Creating yet another campaign that questions the reproductive choices of Black women has, and will always get people talking. Because after all, our choices as Black women are free reign for everyone to probe, and judge. The group, in partnership with the Radiance Foundation, has also set up a website, toomanyabortions.com, which provides statistics like 40% of Black pregnancies end up in abortion, and that abortions in the Black community occur at three times the rate of those in White communities. While these statistics may come from reliable sources, is it not interesting that right-to-life groups are choosing to highlight the abortion rates in Black communities alone, instead of focusing on the whole picture, which shows that women of all races have abortions? A New York Times article published this week on the matter may provide some clues as to why the group suddenly cares about Black folk. “The game changes when Blacks get involved,” said Pastor Johnny M. Hunter, an abortion opponent, speaking on a movement that has largely been viewed as a White and Republican. “In the pro-life movement, a lot of the groups that have been ignored for years, they’re now getting galvanized.” Black anti-abortion groups have rallied around the message and are calling for the government to cut funding to institutions like Planned Parenthood because, they say, abortion clinics are disproportionately located in low-income neighborhoods (read: Black and Hispanic) and “prey on Black women.” One group even calls abortions “womb lynchings.” “It’s the perfect storm,” said Loretto Ross of the SisterSong Women of Color Reproductive Health Collective, who cited that the idea that abortion is meant to wipe out the Black population maybe gaining traction because of a history of oppression. Yet, throughout the heated pro-life versus pro-choice debates around Black women, you’re not hearing of conversation about solutions like providing more education about birth control. What you are seeing are scare tactics that single out Black women, yet again. Read More: