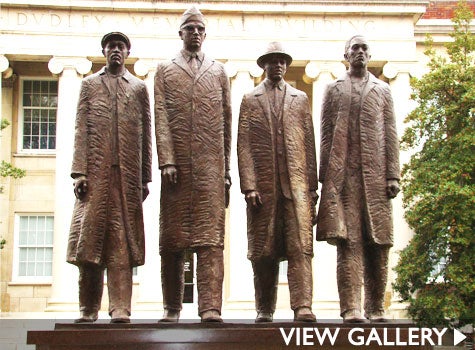 On February 1, 1960, four brave college freshmen had enough with the segregation laws in Greensboro, North Carolina. The North Carolina A&T students decided to stage a sit-in at a “whites only” lunch counter in the city that helped spark a civil rights movement. Years later, the countertop is remembered as the Woolworth’s lunch counter and the young men are called the Greensboro Four.  “In order to be courageous and strong to make a difference in this world, you don’t have to be 7 foot tall and weigh 350 pounds, and dunk a basketball,” says Representative Earl Jones of the North Carolina legislature, one of the founders of the historical museum. “You can simply be a young freshmen student and do something as simple as sitting down at a lunch counter and refuse to move. You can help shape America.” Fast-forward to the present day, the International Civil Rights Museum opens in recognition of these courageous men. The event marks the 50th anniversary of the day the four men staged the sit-in. “This is a gift to the world. Fifty years ago, February 1st fell on a Monday,” says founder, Melvin Alston, a Guilford County commissioner.  “We really feel like this was ordained by God himself that we opened up this museum on the 50th anniversary. And it just so happened to be the time that we got our first African-American president of the Untied States.” ESSENCE.com got exclusive photos of the new museum. You may not be able to be there to cut the ribbon, but you can enjoy the beautiful vintage photos. Read more:
Loading the player...