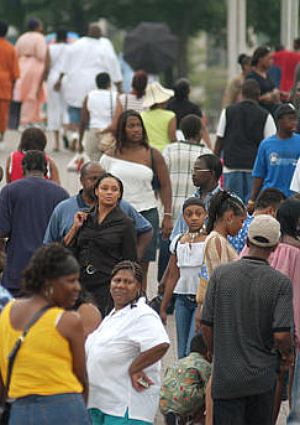 Ten teenaged boys were shot during three separate incidents near celebrations for the Indianapolis Black Expo yesterday, reports the Associated Press. The first shots were heard around 9:30pm as a gunman targeted a crowd in downtown Indianapolis leaving eight boys wounded. The second shooting took place minutes later and left one young man wounded. The third took place around 11:30pm and left another wounded. The boys, aged between 10-18, were taken to nearby hospitals and listed in critical condition. Tanya Bell, president and CEO of the Indiana Black Expo released a statement saying that the organization is working closely with authorities. “We are saddened by the reported incidents that occurred downtown this evening,” she said. “The incidents were isolated from the IBE events that were planned by IBE and its countless number of volunteers and numerous partners.” Police have made three unrelated arrests on weapons charges. IBE is celebrating it’s 40th anniversary this year and its Summer Celebration events will continue as planned today.