By clicking Sign Up, you agree to our Terms of Use and that you have read our Privacy Policy
Skip to content
By Anonymous · Updated October 28, 2020
We are in love. In that way, we’re like so many couples who meet, develop a relationship, and get married when the time is right. But for us, getting married in May of this year brought not only happiness, but also a great deal of uncertainty and secrecy. We are lesbians, and one of us is serving in the U.S. Armed Forces. This union would not be the same as that of others.

We both dreamed of a military wedding, with everyone garbed in their dress uniforms and proud as they could be. But sadly, we still live under the day-to-day realities of “Don’t Ask, Don’t Tell” (DADT), a policy that prohibits gay, lesbian, and bisexual service members from disclosing their sexuality, at the risk of being discharged and having their careers ruined.

The wedding was six months after President Obama signed DADT repeal legislation, but our wedding still had to be a secret. That’s because the new law set forth a process for repeal, but that process has not yet concluded. We remain grateful to organizations like Servicemembers Legal Defense Network, OutServe, Military Partners and Families Coalition and GetEqual, who continue to push for certification and repeal of the law.

We could only tell a handful of friends, and almost everything we do as a married couple is a secret. Neither of us had imagined our wedding day being shrouded as if it were something to be ashamed of. On the contrary, we are very proud and happy that we could be married, but it hurt us deeply to not be able to share this joy with everyone around us.

We had a few supporters at the wedding, and we were very honored to have them there. These were friends, partners, and even other active duty military personnel. Everyone with us that day could relate to what we felt inside. 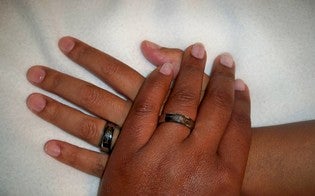 As a married couple in the military, the expectations of us are the same as those of our straight counterparts. We are deployed, relocated, and follow all the same rules. Yet, we live without the support received by heterosexual military families. We have to be careful not to hold hands or show any public affection. We have no pictures up of us that would be questionable. And we make sure our online social pages are private and many of our pictures protected.

Married life is beautiful, but we can’t tell the people we meet that we’re married. One of us can’t yet change her name. She can’t go on base to promotion ceremonies or purchase food at the commissary like other military families. As far as the military is concerned, she doesn’t exist; our family doesn’t exist. She’s the “roommate” or the “cousin” who’s visiting.

There are many even in the LGBT community who are not aware that there are more than a thousand benefits available to heterosexual couples that are not available to same-sex couples. There is so much we live without simply because we love someone of the same sex.

Repeal of DADT won’t bring full equality for LGBT military spouses, but it’s certainly an important step forward. We hope for many things to change, including the fear that one of us could lose her job. We look forward to taking part as a couple in simple events like ceremonies and going on base to socialize together. For a long time, we have lived under a heavy cloud of fear — one that hangs over the heads of all LGBT military families.

We have no regrets about the sacrifices we have made, because we love this country. Our motto is “mission first.” But we’re excited about the day when we won’t have to conceal who we are in order to accomplish the mission of helping to serve and protect the nation we love.