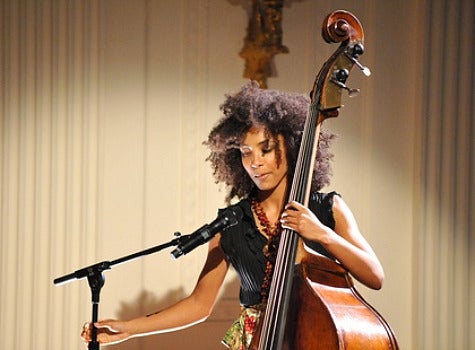 In a first for the Nobel Peace Prize ceremony, President Barack Obama asked to have jazz played after his acceptance speech, instead of classical music. As Nobel Committee Secretary Geir Lundestad put it, “We have a new type of laureate, we’ll have a new type of music.”

And the musician President Obama handpicked is 25-year-old jazz vocalist and bassist Esperanza Spalding. Sporting a signature ‘fro and upright bass, the Oregon native is known for her spirited renditions on jazz classics. She’s made a name for herself in jazz circuits; her second album, “Esperanza” garnered her the kind of critical acclaim every new artists crave for. She’s also the youngest faculty member at Berklee Music College in Boston. Not bad for a girl who taught herself to play violin after watching cellist Yo Yo Ma on “Mister Roger’s Neighborhood”. And to have the Obama’s as your biggest fans must just be the icing on the cake.