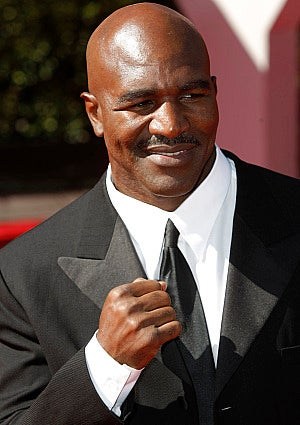 Last week, news broke that Evander Holyfield may have hit his wife, Candi Calvana Smith in the face during an argument over church payments. Smith filed for a temporary restraining order against her husband and also claimed that he had been violent with her before, according to RadarOnline.com. Now, RadarOnline is reporting that Holyfield and Smith are in discussions to appear on talk show “Dr. Phil” to try to mend their relationship. Holyfield’s spokesman Dwayne Corbitt confirmed that the couple is considering appearing on the daytime talk show. Smith eventually withdrew her petition for a restraining order against Holyfield. She also told RadarOnlne, “there is no anger and resentment between Evander and myself.” However, whether Smith believes that her marriage to Holyfield can be repaired is uncertain. As an aside, Dwayne Corbitt also told RadarOnline, “we are also discussing for both Dr. Phil and Evander to go and visit Haiti also in a bid to help the people out there.” Read More: