This summer, folks won’t just be enjoying the beauty of the beach at Martha’s Vineyard. Kicking off the first leg of its tour, the 2015 Harlem Fine Arts Show, the largest traveling exhibition of works by international artists of color, makes its way to the tony island enclave. From August 10 to 12, folks can snag fabulous pieces of art and hobnob with a list of who’s who while learning about the important issues affecting the Black community at the Harbor View Hotel in Edgartown, Massachusetts.

“Art gives people’s perspectives of the past, present and future,” says Dion Clarke, who established the Harlem Fine Arts Show (HFAS) in 2009 to provide a wide-ranging platform for artists of color. “It’s so important for descendants of the African diaspora to have an accurate understanding of [our ancestors’ visions, so we can see] what we’ve done in the past and how it relates to the present and the future.” The show’s name even takes a cue from the prolific period in African-American history that produced art, music, dance and literature expressing a Black consciousness. “We brought the show to Harlem because it is a symbol of the Harlem Renaissance. We wanted to re-create the same positive things that took place during that golden time.” 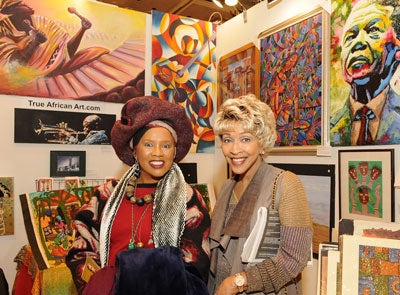 From its humble beginnings as a small exhibit at NYC’s Puck Building, HFAS is now a major annual attraction at Harlem’s historic Riverside Church every February and tours from Martha’s Vineyard to Washington, D.C. (for the Congressional Black Caucus), to Chicago, with stops in Atlanta every other year. Singer Alicia Keys, CBS This Morning co-anchor Gayle King, Congressman John Lewis, film director Spike Lee and ESSENCE Editor-in-Chief Emeritus Susan L. Taylor have all attended.

In the tradition of the Harlem Renaissance, the show has expanded to become an educational, multi-entertainment extravaganza including art investment workshops and multicultural networking events for adults and a Youth Empowerment Day, a STEAM (science, technology, engineering, the arts and math) program, for kids.

The organization seeks to make art accessible to everyone. “You don’t have to spend $100,000. There are pieces that go for as little as $100, $15 or $10,” Clarke says of the numerous paintings, sculptures, glasswork and photography that will be on display against the backdrop of live jazz. “More than anything else, it’s the experience [folks will have] of being able to attend, meet the artists and learn how to purchase a piece.”

Artist panels, plays, poetry readings and book fairs often round out the event. On the lush greens of the Harbor View Hotel, people will be able to see what’s new from our literary voices. Authors will be on board for book sales, signings and readings during the HFAS Authors’ Pavilion, taking place August 10 and 11. Among the featured writers will be award-winning journalist Pamela Newkirk. Her latest offering, Spectacle: The Astonishing Life of Ota Benga (Amistad, $25.99), about an African man who was used as a human zoo exhibit, is a shocking true story about science and racial prejudice in early-twentieth-century America.

The arts and activism have always worked in tandem. The Harlem Renaissance came about to counteract widespread violence against and pervasive negative stereotypes of Blacks in the U.S. in the early 1900’s. Racial injustice continues today. “From the mass killings at Mother Emanuel AME [Church] to the Confederate flag debate to…the death of Sandra Bland in police custody, the events of this summer raise the question, ‘Where do we go from here?’ ” says Salomon, who will serve as panel moderator. “When activist and filmmaker Bree Newsome pulled down the Confederate flag that flew over South Carolina’s statehouse in an act of civil disobedience, she exemplified how creativity and activism can combine to focus attention on injustice. [The panel] will provide a unique opportunity to [talk about] how the arts and activist communities can work together for progress.”

What’s it been like seeing HFAS grow to include covering such critical topics? “I love being able to give back to the culture,” Clarke says. With its ever-expanding roster—Ted Ellis, Verna Hart and Andrew Nichols of the U.S., the Jamaican-born Sir Michael Escoffery, Sarah Morena of Brazil and Nkosi Distinctive Imported Craft, which specializes in African art, will all be at Martha’s Vineyard this year—what’s next for the show? “Our national tour will get bigger and better. We plan to go to Europe in 2017,” he continues. Clarke predicts HFAS participants and their pieces reflecting experiences that are inextricably woven into the U.S. fabric will take the continent by storm. “This is not just an African diasporic type of show. It’s an American show. We’ll be bringing this American show throughout the world.”

For more on the Harlem Fine Arts Show, as well as its itinerary for Martha’s Vineyard and upcoming events in D.C. (September 17–20) and Chicago (October 29–November 1), visit hfas.org.